“Has own oncolytic virus platform and drug development capability.” What is ViroCure’s anti-cancer virus pipeline? 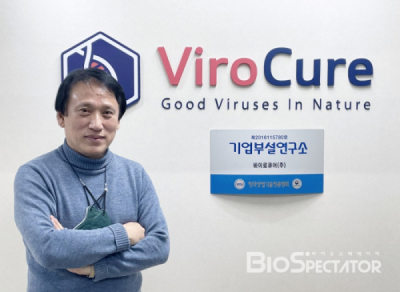 Oncolytic virus refers to a virus that can exhibit anti-cancer effects through its cancer cell-specific infection. Amgen's IMLYGIC® announced the first oncolytic viral therapy for melanoma treatment with US FDA approval in 2015. Global Big Pharma such as J&J, MSD, Abbvie, and Boehringer Ingelheim are working on oncolytic viral research. However, an oncolytic virus that has been approved by FDA has not yet come out since IMLYGIC. Nevertheless, the development fever for oncolytic virus in the global market is still hot.

ViroCure Inc., established in 2016, is a Korean venture company specializing in the development of new oncolytic virus drugs. ViroCure is developing a treatment based on a “safe virus” such as Reovirus, Myxoma Poxvirus, and Squirrel Poxvirus that can infect humans without showing toxicity as it only selectively infects cancer cells.

The advantage of using an oncolytic virus in a combination therapy is that it can selectively lead to cancer cell death through a cancer cell-specific infection. Cancer cells are dissolved after an oncolytic virus infection, which can induce the activation of immune functions because they can act as antigens in the immune system. By inducing an acquired immune response specific to a cancer antigen through this mechanism, a sustained immune effect against metastatic or recurring cancer may be obtained. In addition, inflammatory cytokines such as interferon secreted by oncolytic viruses can activate the immune response, thereby enhancing the reactivity to immune checkpoint inhibitors.

Despite these advantages of oncolytic viruses, there are not many companies in the world that specialize in oncolytic viruses because 'virus' expertise and separate independent facilities must be secured first.

Geun Kim, Director of Strategic Planning, said, "ViroCure has its source technology to develop new oncolytic viruses through gene engineering. Besides, as it has an animal laboratory in the research center, making it possible to quickly check preclinical data of the discovered oncolytic virus. As a virus laboratory, we also have high-concentration virus culture and purification technology for the production and manufacture of essential clinical samples," explaining ViroCure's unique development capabilities.

“ViroCure aims to grow into a global virus company by developing 'First-in-Class' and 'Best-in-class' oncolytic virus drugs within the next few years based on differentiated virus platform and secured source technology”, said Haeng-Jun Yoo, CEO of ViroCure. He also said, "If our development plan goes well, going public in 2022 to the first half of 2023 will be possible as planned."

Let's find out how ViroCure's main pipeline is structured. BioSpectator's CEO Haeng-Jun Yoo, Director of Research Institute Yeon-Sook Lee, and Head of Strategic Planning Dept. Geun Kim shared the current status of the development of new drugs based on Reovirus and Myxoma Poxvirus that ViroCure is focusing on.

◆ Reovirus-based new drug 'RC402' - High safety. The administration route can be selected depending on carcinoma.

'RC402', a Reovirus-based oncolytic virus drug, is being developed for patients with liver metastasis solid cancer. They explained that when RC402 was administered by intra-tumoral injection, no toxicity was observed. This has been validated both in vitro and in vivo through preclinical studies. 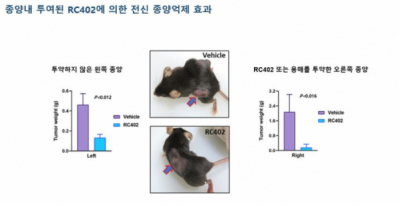 ViroCure is actively in contact with global pharmaceutical companies to conduct technology transfer and joint clinical trials of RC402. "ViroCure holds a patent for RC402 in China. As “unmet needs” for anticancer drugs are showing an increasing demand in the Chinese therapeutic market, we are strategically promoting technology transfer and joint clinical discussions with 10 Chinese pharmaceutical companies." said Yeon-Sook Lee, director of the research institute.

ViroCure signed a joint research agreement (MOU) with CHA Bundang Medical Center (CBMC) of CHA University in July 2020 and jointly conducted a preclinical research on RC402 (PO). Based on preclinical data of RC402 (PO), ViroCure plans to present results at the American Association for Cancer Research (AACR) in April 2021. It also plans to register a patent for RC402 (PO).

'MC509N' is a new oncolytic substance under development based on a double-stranded DNA virus called Myxoma Poxvirus. Myxoma Poxvirus is not a human-derived virus. Like Reovirus, it exhibits infection specificity for cancer cells.

MC509N is a novel oncolytic substance in which various transgenes are inserted using gene recombination technology. Poxvirus has a much larger gene size than Reovirus, allowing a wider variety of foreign genes to be inserted. As a result, MC509N exhibits oncolytic effects by expressing inserted foreign genes and inducing immune responses of viral genes.

Director Lee said, "We are developing a new drug for intravenous "multi-arming" anticancer drugs that have both immune regulator and immune booster functions through MC509N." To this end, ViroCure established a strategic partnership in May 2020 to develop new anticancer drugs using Y-Biologics' antibodies. In addition, Director Lee mentioned, "We have confirmed the anticancer effect by introducing more than 20 types of anticancer genes until last year. We plan to conduct full-fledged clinical development this year targeting individuals with the best anti-cancer effect. Besides, through research collaboration with Asan Hospital, we are conducting preclinical tests to evaluate the toxicity of the MC509N platform."

ViroCure plans to test the safety and efficacy of the candidate material (MC509N) secured in 2021. If the anticancer effect is verified through clinical trials, ViroCure plans to transfer the technology of MC509N to global pharmaceutical companies in the preclinical stage. ViroCure is also pursuing a combination clinical trial with other anticancer drugs to prevent recurrence problems that existing anticancer drugs have after tumor treatment.

Director Lee explained RP116 as follows. “It is expected that RP116, which lacks Spike protein, can give better anticancer effects by increasing immune evasion function in the body.” In addition, Director Lee of ViroCure explains that if specific epitopes, such as cancer cell antigens, are attached to the spike protein site of RP116, there is a possibility of developing a new platform that can develop into various oncolytic vaccines.

ViroCure received a US material patent for RP116 in April 2019. Director Lee explained, "Because an intravenous drug is a formulation that is in high demand in the global pharmaceutical industry, we are expecting excellent performance as an intravenous drug for this substance in the future." RP116 is still in the preclinical stage such as MOA (mode of action), toxicity test, and efficacy test. However, if relevant preclinical data are secured, ViroCure plans to submit a clinical investigational new drug (IND) application for RP116 in the US or Australia.