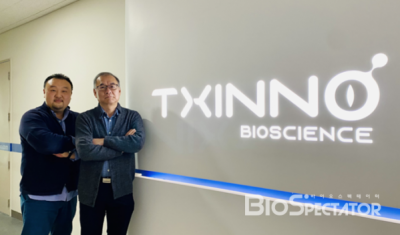 Park, Chan sun, CEO of Txinno Bio, said, "We decided on the unmet needs of the global Big Pharma after much consideration. Until now, immunotherapy has been skewed to T cells belonging to adaptive immunities, and many clinical failures have been attributed. We now need an approach to combine T cells, which are acquired immunity, with drugs that activate innate immunity, where we have differentiated ourselves as low molecular compounds," he said. "On the other hand, in the field of anticancer drugs, targeted therapy is still one big trend, and we selected RAS, which is a simple but challenging task” he explained.

CEO Park previously conducted research and development of medicinal chemistry and targeted therapy/immuno-oncology drugs at Yuhan Corporation and was in charge of introducing “Lazertinib" and transferring its technology to Janssen. He became the leader of the immuno-oncology drug division at CJ Healthcare (now inno.N after Kolmar’s acquisition), moved on to the Korea Institute of Science and Technology (KIST), went through incubation at KIST, and founded Txinno Bio with CTO Kim Sung-joon as a technology investing company in 2020.

CTO Kim, co-founder, obtained a Ph.D. in biochemistry from Rutgers University in the U.S. and established a drug evaluation system at Novartis GNF and proceeded with the development of anti-cancer drugs. Afterwards, he conducted an evaluation assay for small molecule compounds of immunocancer drugs and developing new targets at Newopp Biopharm in the U.S.

Txinno Bio was established in September of last year. In the same year, it attracted a total of 2.55 billion won worth of investment from Schmidt, Korea Investment Partners, and DSC Investments through seed and pre-A series. Txinno Bio established its headquarters and research institute in Gwanggyo earlier this year.

Txinno Bio has its own infrastructure for discovering new drugs, such as compound synthesis and in vitro ADME evaluation. In addition, we are building three in vitro technologies. ▲ Constructing a Ba/F3 profiling model that can efficiently discover kinase target drugs with tumor mutations ▲ Constructing a 3D spheroid (AsPC1 cell line) evaluating lymphocyte migration according to drug treatment to evaluate innate immunity ▲ Such as the construction of a tumor microenvironment in dish (TMED) model similar to the tumor microenvironment.

In terms of developing immuno-oncology drugs, STING increases the secretion of Type I interferon (IFN) and inflammatory cytokines by downstream signal transmission, which is an attractive target in that it activates cancer antigen presentation and tumor-specific CD8+ T cells. It is expected that it will have anti-tumor effects by increasing immunogenicity and tumor-specific adaptive immunity.

So far, Big Pharma, such as MSD, Novartis-Aduro, and BMS, has mostly developed drugs based on modified ring-type dinucleotides, and has been developed in an intratumoral injection (IT) method considering drug features and side effects concerns. However, there were insignificant results in response rate of monotherapy or PD-(L)1 combined injection and disadvantage of not being able to target metastatic sites. As a result, small molecule compounds that activate STING as next-generation drugs are being developed.

ENPP1 is one of them. However, as a difference of drugs that directly activate STING, ENNP1 is expected to have fewer side effects on normal tissues in that it inhibits negative regulators. Type II transmembrane glycoprotein, ENPP1 is an enzyme that breaks down cGAMP. It has the pyrophosphatase and phosphodiesterase activity of nucleotides, and is known to be particularly important for purine signaling. Recently, ENPP1 has been noted for its role in regulating STING signaling as an enzyme that decomposes the STING ligand, cGAMP (cyclicGMP-AMP).

In 2019, Abbvie acquired Mavupharma, which develops the ENPP1 inhibitor "MAVU-104", at the preclinical stage. Mavupharma announced its mechanism of action on increasing interferon and synergetic effects with PD-(L)1, and was scheduled to submit an IND for MAVU-104 clinical trials to the FDA in 2019. However, nothing has been updated in Abbvie's clinical pipeline since the acquisition (based on 2021.02).

Another competitor is Stingray Therapeutics, which is developing 'SR-8314'. Uniquely, Stingray also expects synergies with PARP inhibitors and adenosine drugs based on the mechanism of ENPP1.

CEO Park said, "STING agonist development has been slowed down for a while, but drugs targeting SITNG as small molecule compounds are being developed recently. For example, Abbvie had a deal to take over Mavupharma. "We have secured drugs with good pharmacokinetic (PK) compared to our current competitor Stingray’s."

ULK inhibitors operate as mechanisms to inhibit autophagy. Autophagy is the self-removal of unnecessary substances in cells. Recently, autophagy has been found to be important for metabolism and immunization in the field of anti-cancer drugs, drawing attention again. As a result, new targets such as VPS43 are being developed to selectively inhibit autophagy. But there are also difficulties. VSP43 is involved in autophagosome formation, but at the same time, it is also involved in vesicular and endocytic trafficking, raising concerns over side effects. In addition, inhibition of autophagy plays a conflicting role in promoting progress depending on the stage of cancer or tumor stage. In other words, the role of autophagy varies depending on the situation.

The developmental concept of recently attempted autophagy inhibitor is to target specific pathways/cancerous species. It is the same approach to develop ULK-1 inhibitors targeting RAS mutations. It also has the advantage of being targeted by drugs. ULK-1 is an enzyme that is involved in the autophagy onset stage, which is activated by recognizing nutritional factors and stress, and has a serine/threonine kinase domain that can be targeted as a small molecule compound.

RAS mutations are found in approximately 30% of cancers, but have failed to develop RAS inhibitors over the past 30 years. It is observed about 98 percent in pancreatic cancer, 45 percent in colorectal cancer, and 30 percent in lung cancer. Previously, attempts have been made to suppress downstream signal transmission of RAF-MEK-ERK in RAS, but no successful clinical results have been achieved with a single drug. Soon, companies such as Amgen and Mirati will submit applications for new drug licenses to the U.S. Food and Drug Administration (FDA) this year for the KRAS G12C inhibitor. However, there is still a high demand for the efficacy, tolerance, and other mutated variation types of drugs.

In this regard, the attraction point is that ULK-1 has the potential to overcome existing drug resistance. CTO Kim said, "Recently, there is a proof of concept (PoC) data that ULK-1 can target RAS mutation tumors. When cancer cells get multiplied in stressful situations, ULK-1 signaling is activated through AMPK, and autophagy is activated”.

Specifically, two papers were published in 2011 containing that RAS mutated cancer is an essential factor for proliferation and maintenance due to active autophagy, and that inhibiting it hinders cancer growth(doi: doi: 10.1101/gad.2016311, 10.1101/gad.2016111). However, there was controversy over the reproducibility of the results. Then, in 2019, three independent groups reported that autophagy is important as a resistance mechanism to MAPK inhibition in RAS mutated cancer. When RAS mutation occurs, MAPK and autophagy are activated by downstream signal transmission, which means that if MAPK signaling is suppressed, the autophagy is further activated. If both pathways are suppressed, tumor growth can be effectively suppressed.

CEO Park said, "We have currently found drugs in the ‘hit’ stage and will conduct drug optimization this year and aim to develop them as 'best-in-class'."

So far, a confirmed competitor is Deciphera Pharmaceutics in the United States. Deciphera is developing the ULK-1/2 inhibitor 'DCC-3116' and plans to start clinical trials in the second quarter of this year. It has designed drugs with low blood-brain barrier (BBB) penetration to avoid side effects, and brain:plasma ratio is about 4%. 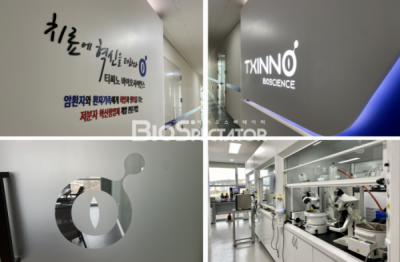