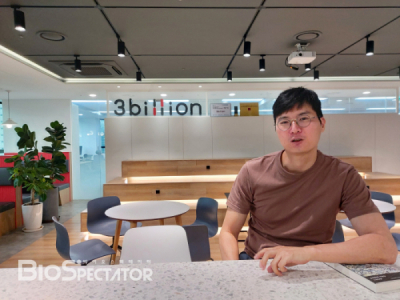 3billion focuses on rare genetic diseases. There are already over 7000 rare diseases, and approximately 250 rare diseases are emerging every year. 3billion provides rare disease diagnosis solutions for 'diagnostic odyssey' patients who travel from one hospital to another without knowing whether they have a rare disease and not being properly diagnosed, and has gone one step further to take on the challenge of developing a new drug based on it.

The company’s goal that 3billion CEO Changwon Keum pursues is clear. CEO Keum explained, “I became interested in diagnosing rare diseases because there is a demand in the market, but other people are not doing it well, and thinking about what is a must-have product that does not exist now”, and “There are more than 7000 rare diseases, and approximately 250 new rare diseases occur every year. More than 70% of rare diseases are genetic diseases. However, from the point of view of a doctor, it is not easy to come up with a rare disease or a genetic disease just by looking at the symptoms of the patient”

According to CEO Keum, since doctors mainly know about diseases in their area of specialization, patients experience so-called diagnostic odyssey, going to 8 hospitals for an average of 5 years to be diagnosed with their disease. Through this process, approximately 70% of patients are diagnosed, but the other 30% remain undiagnosed. In the case of a patient who is not diagnosed at this time, the probability of not being diagnosed even after that is greatly increased.

Even if a doctor suspects a genetic disorder and conducts a single gene test or a panel test, it is not easy to diagnose a specific disease. Although the number of cases in which genetic mutation can occur is countless, a single gene test that tests only one suspected gene that is expected to have a mutation or a panel test that tests dozens to hundreds of genes has limitations in diagnosis....