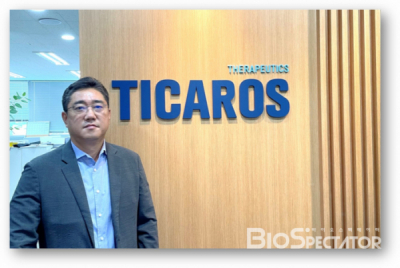 Jae Won Lee, CEO of TiCARos, said, “We are developing a CAR-T that has improved anticancer effects and reduced side effects by engineering T cells” and “We plan to enter a phase 1 clinical study for blood cancer by next year, and our ultimate goal is to develop a next-generation CAR-T that can be applied to solid cancers in the future”.

TiCARos Therapeutics is currently developing three CAR-T development platforms: CLIP CAR, Converter CAR, and Switchable CAR. In addition, TiCARos has established an antibody research team and is discovering new antibodies on its own.

TiCARos' lead pipeline is CD19 CLIP CAR-T 'TC011' with CLIP CAR(Clamping-based Immunological Synapse Potentiating CAR) technology that enhances the immune synapse of T cells and cancer cells. At the end of this year, TiCARos plans to submit a phase 1 clinical study plan(IND) of TC011 to the Ministry of Food and Drug Safety in Korea for diffuse large B cell lymphoma(DLBCL), a blood cancer, and initiate the clinical study next year.

TiCARos' short-term goal is to enter a phase 1 clinical study for lead pipeline TC011 and attract Series C investments by next year. In the mid- to long-term, TiCARos plans to expand indications to solid cancers, advance platform technologies such as Switchable CAR-T, and promote an initial public offering(IPO). Biospectator listened to TiCARos' platform technologies and pipelines.

First, let's look at the structure of CAR. The CAR structure consists of an scFv domain that recognizes a tumor antigen outside the cell, a hinge, and a T cell activation signal transduction site through a transmembrane domain(TM). In particular, in the transmembrane domain, CD28, 4-1BB, OX40, etc. are used as co-stimulatory molecules for T cell activation, and CD3ζ is used as a stimulatory molecule.

In particular, the existing CAR-T treatment is considered a game changer as it has a high ORR of about 34-66% for blood cancers such as malignant B-cell lymphoma, but it has a limitation in showing a low response rate in solid cancers. The reasons for the low efficacy of CAR-T in solid cancers include △Difficulty in selecting tumor-specific antigens with high efficacy and safety due to heterogeneity of solid cancers △Insufficient penetration of CAR-T into solid cancers △Tumor Micro Environment(TME) creates an immunosuppressive environment.

Recently, to overcome this, the development of CAR-T using various antigens such as EGFR and mesothelin, and combination therapy to increase the immune response by modulating immuno-oncology and TME are being studied.

Using a model in which lymphoma cells were injected into immune-deficient NSG mice, TiCARos compared and evaluated the anticancer effect by administering m19BBz and TC011, which are CAR-Ts of the same type as that of Kymriah. As a result, in the control group, the cancer spread throughout the body from the 14th day, and all died on the 21st day. On the other hand, the mice administered with m19BBz showed a tendency to decrease tumor cells on the 14th day compared to the control group and increase the tumor cells on the 21st day. On the other hand, in mice administered with TiCARos’ TC011, the cancer began to disappear from the 14th day of administration of tumor cells, and was hardly observed on the 21st day.

CEO Lee said, “Currently, toxicity studies are in progress at the GMP level, and the lab study confirmed that there was no effect on the toxicity and weight change of the mouse model” and “We expect that there will be no toxicity problems as it survives for 150 days after TC011 administration”. 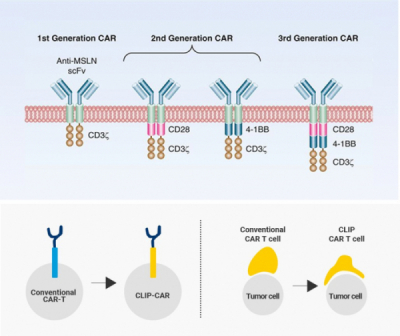 For normal T cell activation, in addition to recognizing antigens by binding of T cell surface receptor(TCR) and MHC of APC, activation of lower signal through CD28, a T cell stimulator, is required. CD28 binds to B7, a ligand on the surface of APC, to activate T cells, but when over-activated, CTLA4 expression, which has 20 to 100 times higher B7 affinity than CD28, increases on the T cell surface and inactivates T cells. CEO Lee said, “Co-founder, Professor Choi, has developed a chimera in which the signal transduction site of CTLA4 in T cells is replaced with CD28 based on this”.

Common CTLA-4 antibody suppresses the inactivation of T cells and strengthens the immune response against cancer cells to obtain anticancer effects, causing side effects due to excessive immune responses. CEO Lee said, “We are developing a CAR-T cell treatment that enhances anticancer effects and reduces side effects with CTC28 CAR-T cells introduced with CAR that targets cancer antigens and CTC28 that activates T cells”.

In addition, the anticancer effect was confirmed in a mouse model administered with blood cancer cells using CTC28 CAR-T cells of this structure. As a control group, m19BBz, a CAR-T of the same type as that of Kymriah, was used, and as an experimental group, ‘CTC28 CAR-T’ with converter technology was used.

First, when m19BBz was administered at a dose of 5x10^6, the tumor size was effectively decreased, confirming the anticancer effect. Next, TiCARos administered m19BBz, which was reduced to 1/10 of the dose, and CTC28 CAR-T at a dose of 5x10^5. As a result, tumors recurred from about 20 days after administration with m19BBz, whereas tumors did not recur even after about 40 days after administration with TiCARos’ CTC28 CAR-T.

In addition, TiCARos is developing a Switchable CAR-T to overcome the toxicity issue that appears in the existing CAR-T cell treatment. Most tumor surface antigens are not specifically expressed in tumors but are also expressed at low levels in normal cells, resulting in toxicity.

TiCARos presented an on/off target toxicity avoidance approach that controls toxicity to normal cells by controlling the amount of adapter antibody by making an antibody as an adapter instead of direct binding of CAR-T cells to tumor antigen. TiCARos engineered antigens such as CD19 and CD40 that target cancer cells to express specific epitopes, and uses CAR-T cells that bind to these epitopes.

As a result, they bind in the order of cancer cell-adapter antibody-CAR-T cell treatment, and as the adapter antibody binds more in tumor cells than in normal cells, it is a concept to control toxicity by adjusting the dose. TiCARos has discovered two new antibodies for adapters and aims to enter preclinical studies next year.

In addition, as a strategy to overcome the heterogeneity of tumor antigens expressed by cancer cells, TiCARos is developing CAR-T applicable to solid cancers by discovering new targets expressed in tumor cells and vascular endothelial cells in tumors.

CEO Lee said, “Although optimization is still needed, we confirmed excellent anticancer effects as a result of early studies in mouse models” and “We expect that it can be applied to lung cancer, ovarian cancer, breast cancer, and liver cancer, and we plan to proceed with lung cancer and liver cancer as the first target”. 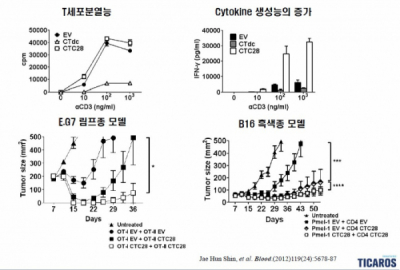