In December of last year, following the licensed in of Claudin 18.2 antibody, strengthen their cooperation in the ADC field 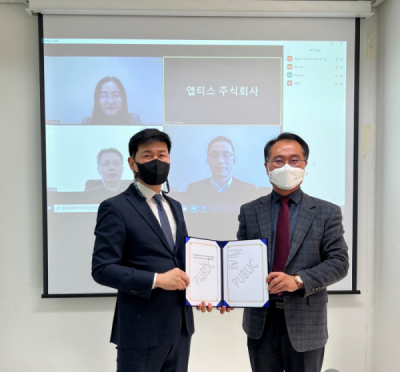 On the January 12, 2022, GenScript ProBio(Brian Ho-sung Min, CEO), a global bio-CRO and CDMO, and AbTis(Jeong Sang-jeon, CEO), owner of the ADC(antibody-drug conjugates) platform technology, announced that they had entered into a strategic cooperation MOU concerning the development of a new anti-cancer ADC.

GenScript ProBio and AbTis have agreed to strengthen their cooperation in the ADC field through this MOU.

In December 2021, AbTis licensed in antibodies from GenScript ProBio that bind specifically to Claudin 18.2, which are overexpressed in solid tumors of certain cancers, such as gastric and pancreatic. In this way, AbTis was able to build its own Claudin18.2 ADC pipeline, incorporating its own ADC linker technology. AbTis announced that it would pursue clinical development of Claudin 18.2 ADC with the goal of achieving First-in-Class as well as Best-in-Class.

AbTis' ADC platform technology, AbClick®, is an innovative third-generation ADC technology that allows linkers and drugs to bind to specific sites in antibodies without modifying or mutating them, which products superior results in terms of safety, effectiveness, and quality. According to an AbTis spokesperson, several studies have demonstrated that the AbTis’ ADC linker has excellent stability, which release drug substance only in the presence of enzymes overexpressed in cancer cells. In particular, it was highlighted that since linkers selectively bind to specific lysine at the Fc site of existing antibodies, it is possible to control the drug-to-antibody ratio (DAR), which makes it a competitive technology for CMC.

The global ADC market is growing rapidly, and new FDA-approved drugs such as Enhertu, Trodelvy, and Padcev are expected to become new global blockbusters in the near future. Furthermore, in June 2021, Eisai, a Japanese pharmaceutical company, executed a licensing agreement with Bristol-Meyers-Squibb from the United States concerning an Anti-Folate Receptor Alpha ADC, under which it received an upfront payment of 650 million USD. In August of the same year, China's Remegen signed a contract with Seagen for the export of HER2 ADC(disitamab vedotin) technology for a total of 2.6 billion USD.