OliPass, the Nucleic Therapeutic specialized for Exon Skipping, a Game Changer in the Market

“OliPass has found its positioning strategy as a biotech that is equipped with clinical pipelines that are completely different from the existing ones. OliPass is specialized in the Exon Skipping therapeutic agent, which is capable of controlling the manifestation of pre-mRNA. pre-mRNA consists of exon and intron; and the exon skipping refers to the skipping over certain exon. Through this, the therapeutic agent that acts as a mechanism for inhibiting target protein is ultimately developed. The artificial nucleic technologies of OliPass are applicable to all diseases. For the application, OliPass intends to transfer candidate materials through diverse routes of administration for a wider range of diseases to verify the efficacy of drugs in clinics, and a longitudinal franchise of immunology is planned for development”

President Jung Shin of OliPass introduced the changed strategies of the company as explained above. 2018 was a significant year for OliPass. Above all, in November, the MHRA of the United Kingdom approved the clinical trial of ‘OLP-1002’, the SCN9A-inhibiting non-opioid analgesic. This was the first case of a clinical trial of peptide nucleic acid (PNA)-based material that has resolved the issue of in vivo safety, which has inhibited the development of existing nucleic therapeutic agent.

Consecutively, in December, the company concluded a strategic partnership for the joint development of therapeutic agent for rare diseases by using PNA platform technology with the large cap of a billion dollars of aggregate market volume listed on NASDAQ. On the derivation of candidate materials, the partner company is expected by the contract to develop and commercialize therapeutic agent therefrom for rare diseases.

The PNA therapeutic agent platform technology of OliPass is incomparable with those of its competitors. This is due to the nucleic structure, material characteristics, and mechanism of action thereof, which are different from others. The PNA of OliPass was conceived from the idea of an artificial gene that was developed in the 1990s.

To resolve the instability of nucleic material, the PNA employed peptide as a skeletal frame, instead of using the ‘phosphoryl + sugar’ skeletal frame of nucleic acid. However due to the presence of phosphoryl, the PNA exhibited neutrality compared to existing materials that exhibited negativity, thereby prohibiting infiltration into the cell membrane, which resulted in the disability of the manifestation of efficacy as a drug. Thirty years have passed since the appearance of PNA, and it has been exclusively used for diagnosis, rather than clinical application.

Two characteristics of the artificial nucleic acid of OliPass have been changed, in order to overcome the limitation of PNA. First, the cationic lipid (NH3+), which plays the role of surfactant, has been introduced into the base part of PNA nucleic acid. This has enabled the higher cell permeability of OliPass PNA, regardless of the type of cell. In contrast to conventional nucleic acid drugs, no system of transferring materials into cells is needed. Second, the binding force to nucleic acid has been enhanced. OliPass PNA exhibited binding force that was approximately one billion times stronger than those of existing nucleic acid therapeutic agents.

Thus in the clinical trial, an ultralow volume of PNA is expected to be administered. Based on animal test, OliPass also expects analgesic effects from the administration of just µg of PNA, which is in clinical trial beginning this year. By considering the average 100 mg concentration for systemic administration of existing nucleic acid drugs, the dosage of drug corresponds to the amount of a hundred thousandth. Reduced side effects are also expected through the reduced dosage.

OliPass PNA is a technology that is specialized for the targeting of the exon-skipping mechanism of pre-mRNA. It exhibits therapeutic effects by binding with exon-intro junction, among the sequences of pre-mRNA. More concretely, the OliPass PNA simultaneously binds with the spliceosome site of intron and target exon. The splicesosome E, which initiates splicing, cannot bind with the intron wherein the OliPass PNA resides. Thus, the splicing occurs by skipping over the area of ‘intron + exon’ that is bound with OliPass PNA. As a consequence, the mRNA that is different from the original one is created, and thereby, the manifestation of protein is reduced.

The development of therapeutic agent using the exon skipping mechanism focuses on the cases where the targeting has been disabled, except for the exon skipping. Currently, two drugs targeted at exon skipping are on the market shelves, FDA approved Sarepta's DMD medicine ‘Exondys 51(Eteplirsen)’ and Ionis’s SMA medicine ‘Spinraza(Nusinersen)’.

The OliPass PNA technology is expected to be a game changer compared with those of existing technologies, because the technology can resolve issues associated with drug efficacy and drug price. Since the OliPass PNA exploits the exon skipping mechanism to inhibit the manifestation of protein, it can theoretically be applied to any disease. President Jung explained, “… it is a realistic technology that is applicable as a drug to diverse diseases beyond rare diseases.”

The OLP-1002, of OliPass, the non-opioid analgesic that has been in clinical trial since last year, inhibits the SCN9A gene. SCN9A is a gene encrypting the 1.7 type (Nav1.7), among sodium (Na+) channels. The principle of binding of OLP-1002 with SCN9A pre-mRNA, which induces SCN9A exon skipping to result in the creation of deactivated SCN9A mRNA, is exploited. 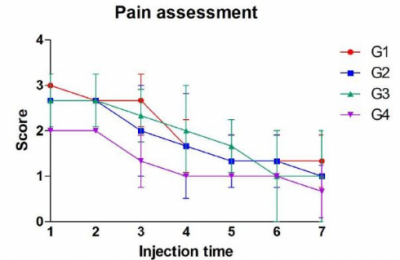 In the experiment conducted with in vitro bacterial strain, OliPass identified that the OLP-1002 inhibited SCN9A more than 1,000 times specifically than the genes of sodium channel at the level of gene and protein. The OLP-1002 also exhibited analgesic effect for the mouse suffering pains, compared with that of Pregabalin, the non-opioid analgesic. Besides, the analgesic effect was found to increase in accordance with decreasing mRNA and protein in the tissue of the dorsal root ganglia (DRG) of mouse. The OLP-1002 was administered at the level of pM to a dog suffering chronic pains for three weeks, from which excellent analgesic effects were found, with few side effects.

OliPass is currently running the Phase-1 Clinical Trial, wherein the protocol of single administration (NCT03760913) through subcutaneous injection of OLP-1002 is provided to healthy subjects by applying the capsaicin model; the dosage thereof will be of the levels of (ng–µg). The clinical trial is scheduled to finish in the first half of next year. Above all, OliPass is aimed at arthritis.

President Jung stated, “…arthritis is a disease that has no therapeutic agents; thereby the patients of arthritis are prescribed with anti-inflammatory analgesics or drugs of the TNF-α families…”, “… the markets of TNF-α families have grown with excellent efficacy; however the price of 5,000 USD for one year is still high. We intend to make inroads into the market with a price that is one-fifth of the current price; there are definitely unmet needs in the market.”