Declaring to start medical diagnosis business equipped with source technology, establishing U.S. corporation TomoDX, and conducting a clinical trial in both Korea and the U.S. at the same time

Tomocube has recently declared to begin a business in medical diagnosis based on its development of three-dimensional holographic microscopy which is designed to observe cells in real time. In 2018, the company recruited Dr. Min Hyun-seok experienced in AI software development at Samsung Electronics to build an AI team and develop a diagnosis program for which three-dimensional holographic microscopy and AI technology could be combined.

“Since the release of three-dimensional holographic microscopes HT-1 and HT-2 in 2016 and 2017, respectively, we have continued our efforts to make them as perfect as possible, particularly focusing on image quality and performance. We also studied how to apply the technology to disease diagnosis at the same time. A journal on analysis of bacteria species published earlier this month is the first outcome in our development effort,” Tomocube CTO Park Yong-geun explained.

The holographic microscope (HT) developed by Tomocube shares the same principle of X-ray or CT. It shoots a laser beam with a very low output and calculates refractive index from mathematical or engineering point of view when the laser beam passes through cells. In doing so, a live cell imaging in three dimensions becomes possible.

“We put great efforts to evolve the HT technology to enable observation of live cells without having to go through a pretreatment process such as fixing or dyeing like the past. As a result, we have been able to improve image quality and largely extend imaging range. Imaging in three dimensions for cells and tissues has become possible,” said Mr. Park.

Tomocube has expanded the market by reinforcing its marketing strategy and the international network. CTO Park said, “We released application notes to inform the public about how to adopt our products for various researches. At the same time, to promote the products, we used video clips showing how researchers worldwide like a Harvard medical school professor could apply our products in the field.” Currently, Tomocube research HTs are being marketed in 17 countries and more than 70 journals on Tomocube have been published. 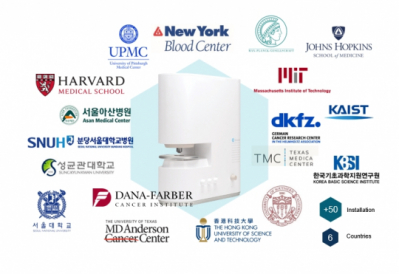 The company is developing new technologies to create diagnosis products by adopting them, ultimately making the product business successful. It is focused on a diagnosis program in which three-dimensional holographic image big data obtained from HT are combined with AI.

A good thing when you use image data from HT is that consistent results can be obtained regardless of time or user as these data use each unique refractive index that cells or tissues have. “We quantitatively analyze each unique physical quantity of cells and tissues. Therefore, our results are always consistent. This is a remarkably significant strength when one uses big data for AI learning,” stressed Mr. Park.

Even more detailed analysis is available because you can get three-dimensional images, unlike two-dimensional data from the existing method. Moreover, it takes only minutes to both bring and analyze the video image.

Tomocube prioritizes blood poisoning as the target and obtains image data of 19 bacteria causing a disease. It then makes them learn convolutional neural network (CNN) model, one of the deep-learning models. “We have secured 300-500 image data for each species and used more than 5,000 data in total,” a company official said. If one applies the analyzed model after finishing learning of a patient sample, it will identify the cell image and define the bacteria species.

Earlier this month, Tomocube published a journal on application of learned analysis model to bacteria species analysis in the form of blind test. According to the journal, the present analysis model classified the species by measuring bacteria without a pre-treatment process like culture or reagent. It showed an accuracy of 95%. The true positive rate is 94.6% and the true negative rate is 99.7%. 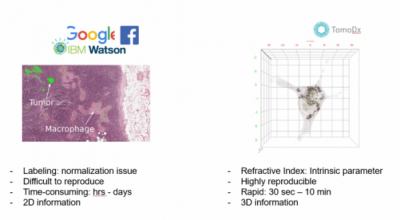 “Now we are conducting a proof of concept (POC) clinical trial together with Samsung Medical Center for validation which includes about 50 individuals. It is designed to end within this year,” Park said. “If the trial brings a positive result and the protocol is established, we will move on to the next step to make the diagnosis equipment be clinically proven to get a license.” Tomocube, planning to conduct a clinical trial in both Korea and the U.S. at the same time, is pushing forward to establish a local company in the U.S. “We want to establish a local company named TomoDX in San Diego, California in the U.S.S where a number of diagnosis companies and convergence companies (a mix of engineering and biology) are located,” Park added.

Tomocube further aims to develop an automated diagnosis equipment and program where AI analysis model can be applied. Under the automated system, data on any blood or tissue sample can be collected, analyzed, and diagnosed.

CEO Hong Ki-hyun said, “We’d like to take a leap forward as an innovative developer of diagnosis products not just remaining in position as the first mover in new technologies. As part of the effort, we will more actively work with hospitals, pharmaceutical firms, and other diagnosis companies.”

“We, as the first mover in the three-dimensional holographic image industry, feel a great sense of responsibility and burden to move ahead at the same time. But I believe we can and will grow even more to give benefits to the medical industry and patients by releasing innovative products,” Hong added.