Therasid is taking up the challenge of developing an inflammation targeting multifunctional drug to treat NASH.

The pharmaceutical company has 6 pipelines including TB840 with RORα targeting mechanism, and has attracted 6.6 billion won Series A investment. 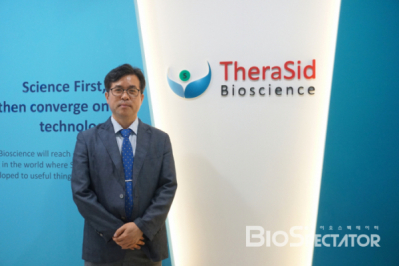 Therasid Bioscience, which opened business in 2017, is a pharmaceutical company that specializes in developing therapeutic agents for nonalcoholic steatohepatitis. CEO Kim Heung-Jae, who has experience in operating an open innovation organization, identifies and evaluates promising technology materials, and conducts R&D activities through organic collaboration with universities and research institutes.

Therasid is developing treatments by targeting inflammation among various specific symptoms of non-alcoholic steatohepatitis [NASH]. ‘TB-840’, the fastest pipeline, acts on RORα to control inflammatory response, and improve the function of mitochondria to accelerate fat metabolism.

CEO Kim said, “We are conducting research and development and pre-clinical trials to verify changes by each progressive stage of NASH, related to various fields that include pathophysiological characteristics, genetics, molecular biology, and histology. We will quickly expand our pipe lines through platform establishment. Therasid recently secured 6 billion won Series A investment from G.N.Tech Venture Investment, Ajou IB Investment, and BSK Investment.

Therasid has announced itself as a specialized company focusing on NASH. Among the pipelines being developed in reflection of such will, there are 6 candidate therapeutic agents that use the prevalence of NASH as an indication. Nonalcoholic steatohepatitis (NASH) is the most serious form of nonalcoholic fatty liver diseases [NAFLD], which can damage liver tissue issues as fat accumulation and inflammation progress. The histopathological mechanism of NASH is divided into four stages: fat deposition, inflammation, fibrosis, and cirrhosis.

CEO Kim said, “Steatosis, inflammation, and fibrosis are usually considered as the disease-specific symptoms of NASH. The existing treatments have been developed as the target of metabolism mechanism to improve steatosis, one of the early symptoms. In contrast, Therasid has set inflammation as a core target for treatment.”

Among the NASH pipelines being developed by Therasid, the fastest one is ‘TB-840’, which is under preclinical trial, and which Therasid introduced from Prof. Lee Mi-Ok of Seoul National University Medical College. TB-840 is an agonist that targets retinoic acid-related orphan receptor alpha (RORα) prevalent in the liver, fat tissues, and muscles. RORα, a nuclear receptor, is known to regulate the genes involved in inflammation, fat metabolism, muscle differentiation, etc.

TB-840 acts on RORα to play the role of activating M2 Kupffer cells. Therasid showed that the ratios of CD206 and CD80, anti-inflammatory markers of Kupffer cells, were increased after 5 weeks of administration of TB-840 at 5 mg/kg concentration in a high fat diet (HFD) mouse animal model. In addition, the secretions of inflammatory cytokines, such as TNF-α and IL-1b, in liver tissues were decreased, while those of anti-inflammatory cytokines, such as IL-10, Arg1, and CD163, were increased.

CEO Kim Heung-Jae said, “It is meaningful that TB-840 can treat both inflammation and steatosis by acting on new targets that are different from the ones used by the existing candidate substances to treat NASH. We have confirmed that TB-840 has the efficacy of multiple functions in several disease models”, he said. “We aim to complete the preclinical phase and enter a phase 1 clinical trial by 2020.”

Among the six candidates being developed by Therasid as a NASH treatment, four of them are discovered by the excluded. In addition to TB-840, TB-901 and TB-711 are being prepared for pre-clinical trials.

“All NASH candidate substances under development by Therasid have multiple functions, and are optimized for the treatment paradigm of NASH caused by a variety of reasons”, CEO Kim said. Therasid is closely examining the characteristics and mechanisms of each pipeline, and is also contemplating the development of combination therapies that can show synergistic effects. The company says that it expects to see combination effects not only between the company's pipelines, but also with a variety of currently developed NASH treatment drugs.

CEO Kim said, “We believe that we need a platform that can provide data that can be proven scientifically for continuous growth and the discovery of new substances, and thereby we are concentrating the company’s capabilities on building a platform.” If we can build a platform that can identify pathophysiological characteristics of diseases by progressive stages using various methods such as genetics, cytology, and histology, and that can produce data without interruption, we can discover and identify candidate substances in a short time. He added, “This will have a positive impact on pipeline expansion, as well as on strengthening our joint research and development capabilities.”