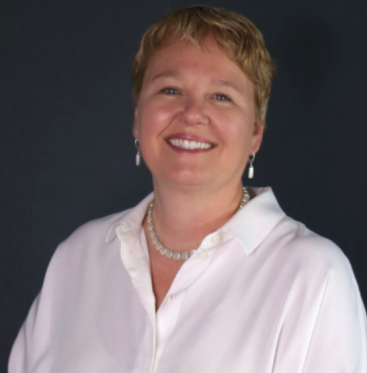 "Anticancer drugs are often designed to look for mutations of cancer cells and to target them. However, most cancer patients do not show distinct genetic variations for targeting by drugs. In this case, how can we find the right patients to administer appropriate medication? Oncologie is establishing biomarker platforms for analysis of tumor microenvironment. The most critical element in a patient’s tumor microenvironment is stroma. The concept is to identify the largest defects of tumors. For example, in the immune system and the blood system and then to administer therapeutic agents with biological mechanism to target them. This concept is called 'dominant biology of the patient’s cancer'."

Laura E Benjamin, founder of Oncologie, recently introduced the company's differentiation strategy in a meeting with Biospectator. CEO Laura served as a professor at Harvard University (1999-2009) and later as vice president of the anti-cancer treatment division at Eli Lilly (2009-2016), where she was responsible for biomarker discovery, portfolio management, and clinical development strategies.CEO Laura studied tumor microenvironment including vascular biology at Harvard Medical School.

She said, "Tumor cells are composed of tumor blood vessels originating from pre-existing normal vessels, immune cells, other types of cells, which cause tumors to grow. I was curious about how to develop an anticancer drug that could target tumor microenvironment, and I joined the industry and learned how a basic therapeutic agent would be translated into drug development. When I was an entry-level researcher, I got an idea about how to effectively target tumor microenvironment with drugs." CEO Laura said that when she discovered an interesting material called 'bavituximab', she decided to establish her own company. At this time, she met Jimmy Wei of Pivotal BioVenture China.

Oncologie is based in Boston, the U.S. and Shanghai, China. The company has succeeded in attracting seed investment from Pivotal BioVenture China, which is an incubator of start-up companies in the bio science field. Oncologie received a Series B investment worth $80 million USD in June of this year.

Oncologie develops and sells anticancer drugs with a focus on the U.S. and Chinese markets. The company has created a team comprised of members with rich as well as extensive experiences in R&D development in different regions. Oncologie is actively conducting R&D activities on PD-1 and PD-L1 'Me-too' therapeutic agents, but has conducted only 20 cases of concomitant medication clinical trials. Currently, this stands in stark contrast with the global market trend, wherein 2,000 cases of PD-1 and PD-L1 concomitant medication are currently being conducted. Oncologie has three candidate substances currently under development and is planning to conduct clinical trials of PD-1 antibodies and concomitant medication on two candidate substances through partnership with large pharmaceutical companies. 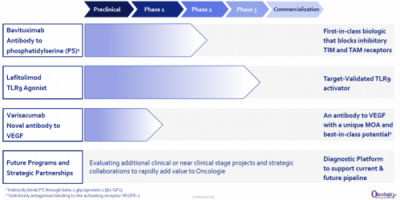 Oncologie boasts of a biomarker-based patient selection and combination therapy as its clinical development strategy. Among them, the differentiated part is a biomarker platform. Oncologie's approach is different in three aspects. First, for selection of patients, we analyze stroma that comprises structure and connective tissues of tumors in tumor microenvironment. Tumors are composed of a mixture of cancer cells, vascular endothelial cells, immune cells, fibroblasts, and other cells originating from outside of tumors. Among them, Oncologie performs analysis with a major focus on blood vessels and the immune system.

Second, Oncologie uses multiple biomarkers. Biology inside tumor microenvironment is markedly complex. The bar is too high to select patients with one gene, one mutation, or one protein. More specific approaches are needed. Oncologie analyzes RNA signature in tumor microenvironment. CEO Laura said, "The mechanism that causes a problem at the time of drug administration after diagnosis of patients is very important, and what corresponds to this concept is RNS signature. For each new drug program, gene signatures are selected using an algorithm that is analyzed by bioinformatics tools." To develop a predictive biomarker diagnosis method for selection of patients, Oncologie has partnered with HTG Molecular Diagnostics, which has technology to analyze hundreds of genes at a time.

Third, Oncologie's biomarkers are platforms that can be applied to all types of carcinoma. However, expression rate of specific TME signatures may vary depending on types of carcinoma. It is a matter of frequency. CEO Laura said, "Tumors keep changing, and tumor microenvironment is a kind of concept that can be more generally applied, when compared with a specific gene mutation. For example, if patients have bavituximab RNA signatures, we can apply it to a broad spectrum of patient groups with colon cancer, stomach cancer, liver cancer, etc., regardless of the types of carcinomas."

Oncologie introduced the 'first-in-class' or 'best-in-class' pipelines of which efficacy and safety were validated in clinical trials. Here, there was a principle. In the case of cancer immunotherapy, it established a portfolio that had different target levels of immune cycle for each project. In the case of bavituximab, the drug targets the late stage of immune cycle, whereas lefitolimod targets the early stage of the immune cycle. Varisacumab is expected to be a 'best-in-class' VEGF drug, of which the mechanism is to normalize tumor vasculature to facilitate movement to a tumor site.

CEO Laura said, "Bavituximab is a drug that targets patients whose immune system is in an exhausted condition. The concept is to reactivate immune cells to fight against cancer cells, For those patients who did not respond to an immune checkpoint inhibitor, concomitant medication is expected to improve response rates."

Bavituximab is a drug of which its safety was already validated in a clinical trial targeting more than 800 cancer patients but had failed in the previous Phase 3 clinical trial of non-small cell lung cancer (10.1093/ annonc/mdy177). It failed to show a significant difference in overall survival, which was the primary endpoint (HR 1.06, 95% CI 0.88 to 1.29, p = 0.533). Also, it did not show meaningful difference in progression-free survival.

Between the two groups, Oncologie focused on data from a group of 93 patients who received immune checkpoint inhibitors. After the survival period of the concerned patients was monitored for 30 months, it was found that the administration of bavituximab made a significant difference in the survival period index (HR=0.46; 95% CI 0.26-0.81, p=0.006).

Oncologie is planning to select stomach cancer patients as a biomarker and start the proof-of-concept clinical trial that involves concomitant medication with PD-1 antibodies in the latter half of the year, and intends to enter the Phase 3 clinical trial by the fourth quarter of 2020.

The second pipeline is lefitolimod (MGN1703), a DNA-based toll-like receptor 9 (TLR9) agonist. The company has a differentiation strategy for a TLR9 activating drug; lefitolimod is a treatment drug, stable in the body, and does not require a drug delivery system. It can be delivered by intravenous administration. Additionally, MOLOGEN has evaluated the safety and efficacy of the substance by targeting more than 500 cancer patients. With a strategy for concomitant medication with PD-1 antibodies, Oncologie intends to be the 'first-in-market' in China.

Oncologie's third pipeline project is varisacumab, which is a VEGF-A target antibody. Avastin blocks VEGFR1 and VEGFR2, but varisacumab selectively blocks VEGFR2. Oncologie is examining the possibility as a 'best-in-class' VEGF-based drug based on the mechanism in action. 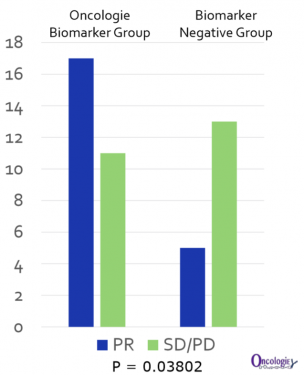 CEO Laura said, "We are going to target cancer segments with a high level of unmet needs, including stomach cancer, liver cancer, and colon cancer, especially in the Asian market. Through strategic cooperation with clinicians in Asia including South Korea and China, we will implement biomarker discovery and clinical development. We will consider listing IPO on HKEX and Nasdaq." Oncologie plans to secure licenses for additional pipelines within six to eight months.