CytoGen, Expandability of Platform of Liquid Biopsy for ‘Live CTC’ 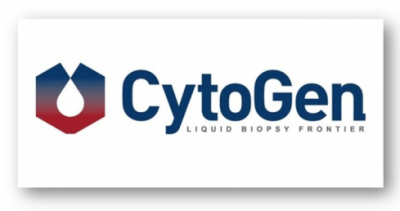 “Biomarker-based Diagnosis” helps administration of pertinent drugs in the development process of new drugs. It is becoming important as the concept of precision medicine in the field of anticancer agent is getting consolidated. The importance of excavation of protein and RNA Biomarkers is be spotlighted to predict the reaction of patient in recent trend of development of immuno-anticancer agent such as PD-1 and PD-L1. This is why global pharmaceutical enterprises are paying attention to analytic technology of circulating tumor cells (CTCs) of Cytogen.

CEO (founder) of CytoGen, Jeon Byeong-hee, stated in the meeting with Biospectator, “… target hitting therapeutic agents were analyzed at DNA level. However, confirmation at protein and RNA level is needed to predict recurrence …”, “… for “Big Pharmaceutical Enterprises” to harvest licenses of candidates for new drugs, methods enabling prediction of drug responses are becoming important…”

Jeon optimized the analytic process of CTCs and completed the platform in 2016 after the company was founded in 2010. Recently, he encounters the turning point of commercialization of liquid biopsy technology based on CTC. So far, the company has secured 84 patents and 40 certifications/approvals associated with the product and diagnostic technology.

The liquid biopsy platform has realized tangible outcomes. CytoGen is having collaborative research with Daiichi-Sankyo Korea. The two met in the international academic conference in 2016 for patients suffering from recurrent non-small-cell lung cancer (NSCLC). The fourth contract was concluded in February this year. Clinical trial for the test accompanying diagnosis will be performed next year. Domestically, the company currently promotes co-research actively with Biotech. It has excavated biomarkers for candidate materials of new drugs and target hitting therapeutic agent with WMBIO. It has also produced biomarkers capable of predicting drug reaction of ‘ABL001’, the double antibody of DLL4xEGFR, of ABL BIO Inc.

Currently, tissue biopsy is used as standard diagnosis for the prescription of targeting anticancer agent. However, there are carcinomas that are difficult to apply tissue biopsy in clinics. For 30 to 40% of cases, results cannot be obtained from tissue biopsy. Besides, it is difficult to obtain tissues repetitively for situations in early diagnosis, recurrence, and prognoses of diseases that are normally expensive and time-consuming (requiring 2~3 weeks). Therefore, an alternative to tissue biopsy came out with the use of body fluids such as blood and urine to find cancers, i.e., the liquid biopsy.

The CTC technology of CytoGen and the ctDNA/cfDNA technology in the field of liquid biopsy can be understood as different fields of applications rather than a competing relationship for applications. Circulating tumor cells (CTCs) are, as the term signifies, cancer cells wandering in the blood. Circulating tumor cells separate from primary cancer where tumors are originated. They circulate in the blood to move into other organs, playing a role in metastasis.

When CTC level should be analyzed? Three occasions need such analysis. First, when profile analysis is needed at protein and RNA levels. In particular, RNA is available only from live cells. Second, CTC analysis is useful to understand metastasis of cancer. In cases with bad prognoses or metastasis, the burden of circulating tumor cells increases. Third, it can be performed to obtain information such as heterogeneity of tumor cells. Despite the availability of multilateral information through CTCs, there are technological difficulties. Billions of erythrocytes and dozens of millions of leucocytes are there in 1 ml of blood compared with a few tumor cells. Therefore, it is difficult to separate circulating tumor cells therefrom.

CytoGen harvests circulating tumor cells by using the order of difference in magnitude of cells. CytoGen uses semiconductor technology in the fabrication of HDM chip (high density micro-porous chip) wherein holes are perforated regularly. A total of 500,000 holes of 5 μm in diameter are perforated by equal spacing of 3 μm, wherein nanotechnology is applied for coating on its surface to avoid damages to cells. Approximately 96% of tumor cells are harvested by HDM chip. Next, the retrieval process is used to collect cancer cells selectively among harvested tumor cells. The Smart Biopsy System™ developed by CytoGen has a retrieval rate of 79~82%.

Circulating tumor cells harvested are then subjected to subsequent process to find specific biomarker. CytoGen uses DAPI as cell nucleus marker, EpCAM as a marker of epithelial cell of cancer, and vimentin, a marker for mesenchymal cell manifesting characteristic of metastasis, as CTC marker. Processed antibody that enables finding of the desired biomarker is then added. Currently, commercialized biomarkers such as HER2, PD-L1, and AXL are used. Besides, the analysis of CTC via liquid biopsy would enable simultaneous analyses of several biomarkers. This illustrates the situation of installing analysis equipment in each hospital that prescribes therapeutic agent upon approval of new drugs and companion diagnostics (CDx) by regulatory authority.

CytoGen announced tracking results of manifestations of androgen receptor, EML4-ALK, and HER2 from samples obtained from patients suffering diverse kinds of cancer such as gastric cancer, bladder cancer, prostate cancer, lung cancer, and breast cancer at global societies of cancer in 2014 upon establishment of platform of liquid biopsy. Recently, results of study have revealed that liquid biopsy is better for finding drug resistance mechanism against targeted therapeutic agent than tissue biopsy. In addition, for diagnoses using biomarkers for prediction or prognosis, partnership with pharmaceutical companies developing new drugs has opened. The announcement of manifestation of AXL and PD-L1 from CTC at conferences of AACR held last year and this year illustrates the strategy of CytoGen.

First, patients suffering non-small-cell lung cancer (NSCLC) of EGFR mutation are prescribed with standard therapy, the EGFR TKI drug. Approximately 80 to 90% of patients administered with the drug, show cancer reduction. However, cancer recurs after average one year from the administration of the drug. The EGFR T790M mutation exhibiting drug resistance against EGFR TKI drug is known as a genetic drift. It can be observed from approximately half of patients. CytoGen has tested the manifestation of AXL protein by using the biomarker predicting recurrence targeted for patients exhibiting negative mutation of T790M. 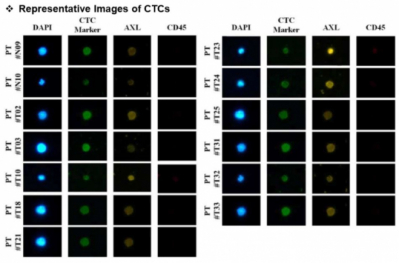 CytoGen compared the manifestation of AXL in CTCs by collecting blood samples from 21 patients suffering from non-small-cell lung cancer that recurred upon administration of EGFR TKI as experimental group and 10 blood samples from patients administered with no drugs as a control group. Results obtained from the comparison revealed higher rate (43%, 9/21 patients) of over-manifestation of AXL in CTCs from patients with recurrence of TKI in the experimental group than that (20%, 2/10 patients) in the control group.

Second, Cytogen intends for the diagnosis of manifestation of PD-L1, a protein biomarker, by using liquid biopsy. CytoGen has also announced that the company will decrease the examination expense to the level of 1/5 ~ 1/10 compared to tissue biopsy by targeting patients showing positive results from liquid biopsy with negative results from tissue biopsy and patients having difficulties in taking tissue biopsy. This reflects the potential increase of drug prescription of the pharmaceutical company. Another advantage of the technology of analysis of CytoGen is that it requires 1~2 days to obtain results. 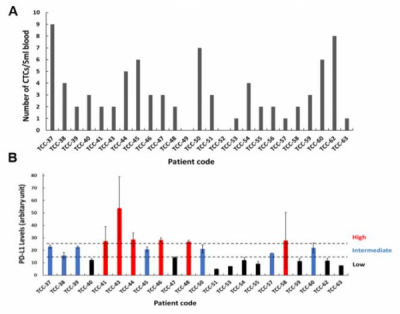 CytoGen targets carcinomas showing difficulties in taking tissue biopsy such as NSCLC (non-small-cell lung cancer), small cell carcinoma, cancer of liver, cancer of pancreas, and cancer of biliary tract. Among them, CytoGen announced the result of collaborative research conducted with Medical College of Catholic University regarding the test of PD-L1 in CTCs obtained from patients suffering from cancer of bladder at the AACR held this year.