“A New Antigen Vaccine employing Antigen Presentation Cell, the B-Cell, was developed… The Pipeline will be expanded through establishing Partnership ...” 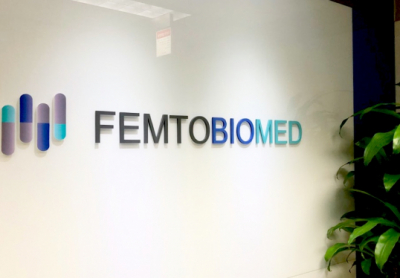 FemtoBiomed, a spin-off from Postech in 2011, presents a new technology of cellular delivery, which will enable cargo-free intracellular delivery of a constant amount of matter to the cells, as a new alternative. President, Lee Sang-hyeon of FemtoBiomed introduced the technology, “… FemtoBiomed established the CellShot™ Technology with the capacity of injecting constant amount of high-concentration matter, such as low-molecular compounds, protein, and nucleic acid via nonviral way. The technology can be discriminated based on its standardization compared to the existing cellular delivery technology, and its applicability to several immuno-anticancer therapeutic agents. We have completed the domestic patent registration of our proprietary technology.”

FemtoBiomed intends to develop a quick and convenient neo-antigen vaccine based on B-Cell by applying CellShot technology. What is unique in the approach is the employment of B-Cell as antigen-presenting cells (APC). It is a different approach with regards to general use of dendritic cell (DC) as antigen-presenting cells (APC) for cancer vaccines or as a means for the delivery of peptides or mRNA.

Immense expandability of technology promises the partnerships to be opened to pharmaceutical companies, biotechnology companies, and hospitals. FemtoBiomed is standing on the turning point of application of CellShot products to the CellShot Oncology Platform™ with an aim to develop an immuno-anticancer agent. FemtoBiomed invited investment of 6 billion KRW for ‘Series B’ from Korea Investment & Securities Co. Ltd. and WidWin Investment in February this year, and listed in the KONEX in July.

Currently, there are unmet needs for nonviral delivery technology such as electroporation in the field of genetic cell therapy products. The research team of UCSF in the USA published the results of their study in the Journal of Nature and attracted attention to cell therapy products targeting autoimmune diseases and cancers by combining electroporation and CRISPR technology. The research team anticipated that they could get over limitations of virus vector by employing electroporation. Based on this technology, the ArsenalBio was founded, and recently invited 85 million USD for ‘Series A’. Currently, there exists a commercialized product of electroporation, the ‘nucleofector’ with an ability to deliver nucleic acid to cells; however, the product is used only at the laboratory level.

CellShot is an advanced technology than electroporation. In short, this technology is capable of injecting matters to cells which are aligned in series and passes one by one. Besides nucleic acid, the peptides, proteins, and polymers can be injected. It is the technology of simple concept whereon a highly sophisticated nanotechnology is grafted, and is an outcome of integration of the device capable of injecting matter to cells by instantly releasing microcurrent, the chip comprising the process, the device capable of quick and constant detection and forwarding cells in a controlled movement, and the automation technology. The ‘Automated CellShot Platform’ was completed last year by an elaboration of the idea initiated from the technology of analyzing single cells based on micro/nanofluids which had been investigated in his doctorate thesis.

The aspect to be noticed in the CellShot platform is that the cells and the matter to be injected into cells are separated from each other. The channel, designed to contain cells, and another channel, wherein the matter is injected, join together in the middle of 2D delivery system. The separation of channels results in less deviation of delivered matters to each cell together with the advantage of selective delivery of matters to cytoplasm or cell nucleus. On the contrary, the existing method of electroporation can be understood as a ‘1D Delivery System’ with respect to the instant inflow of matter by releasing microcurrent into mixture of cells and matter.

President Lee added. “… microcurrent is released into the local part of the cell surface and thereby damages to cell are reduced. According to previously conducted study, the physical or electrical shock applied to surface of cells could result in the drop of cellular functions…”, “… CellShot technology covers broad range of patented rights comprising injection technology, automatic separation of cells, and structure of ‘2D Delivery’, thereby it would be difficult for our competitors to avoid existing patents by embodiment of similar concepts. Besides, the patent rights, corresponding to each matter or immunocyte, can be added to the application of CellShot technology to therapeutic agents.”

CellShot can process approximately 1 ml of injection matter in an hour. By calculating the throughput in terms of cell count, the delivery to cytoplasm corresponds to a million to 10 million counts per hour, and one hundred thousand to million counts delivery to the cell nucleus. In case of preparation of cell therapy products, different outcomes according to delivery to cytoplasm or cell nucleus will be obtained. Besides, the volume to be injected into each cell ranges from femtoliters, 10^(-15), to picoliters, 10^(-12). In general, the number of cell count of CAR-T cells to be injected into body of patients suffering from ordinary cancers is distributed in the range from 10^6 to 10^9 counts.

The research team also identified mono-nucleic acid coupled with fluorescence substance and protein flowing into stem cell via CellShot system. The result was published as a cover paper in the ‘Lab on a Chip’ journal in February this year (doi: 10.1039/C8LC00709H). It was also identified that the IPSC was induced with high efficiency (approximately 2%) for the delivery of Yamanaka’s four kinds of transcription factors into plasmid of somatic cells. The current level of efficiency of existing plasmid ranges between 0.0002~0.0005%, and it represents positive signs as the efficiency of virus vector remains below 1%. SQZ Biotech has technology and strategy similar to those of FemtoBiomed. The technology of SQZ Biotech has a form placed in between electroporation and technology of CellShot. It is a ‘1D Cell Delivery System’ of multi-channel system called ‘SQZ Platform’.

President, Lee added, “… CellShot has the advantage of delivering high-concentration of high-molecular matters compared to the technology of SQZ. The delivery of constant amount of matter acts as a differentiating factor with respect to QC…”, “… as a competitor, SQZ exhibits weak governance over platform itself. On the contrary, CellShot is equipped with strong patent rights…”.

FemtoBiomed currently developed a new neo-antigen anticancer vaccine by exploiting B-Cells as antigen-presenting cells. President, Lee explained, “… up until now, one of the reasons of low efficacy of neo-antigen vaccine can be attributed to the absence of delivery system. The variety of variables, such as the amount of cancer antigen to be delivered to target sites of patients, heterogeneity of cancer, and degree of immunological activity of each patient, etc., created disturbances in the development thereof. Most of the companies focused on the exploitation of artificial intelligence technology in excavating neo-antigens of higher immunogenicity.”, “… on the contrary, FemtoBiomed has a technology of quick and efficient delivery of neo-antigen peptides. Thus, we intend to excavate pertinent neo-antigen via collaborations with biotech companies or hospitals equipped with such technologies capable of excavating appropriate neo-antigens.”

FemtoBiomed intends to conduct tests to identify whether the application of CellShot technology to B-Cells in the OVA-I/MHC-I system results in the actual activation of antigen-specific T-Cells and representation of anticancer activity of mouse model of synxenic tumor. President, Lee stated, “… SQZ Biotech was able to expand partnership with Roche based on the results obtained from OVA System. FemtoBiomed also collaborates with biotech companies and hospitals to attain the data by proving initial concepts next year, and expects that the outcomes will enable us to make deals for technology transfer.”

President, Lee also emphasized in regard to future plans, “… we are intending for the development of the delivery system (ONCO-Lab) pertinent to each project. It will not only be applicable to immuno-anticancer agents including CAR-T, CAR-NK, etc. but also applicable as therapeutic agents for autoimmune diseases and stem cell therapeutic agents. The partnership will contribute to the expansion of developed systems.” 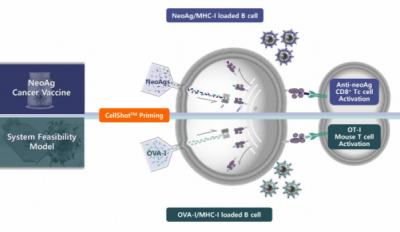