Curocell, plans to submit 'PD-1/TIGIT↓' CD19 CAR-T' IND by the first half of the year

With differentiation strategies to become the global leader, the bio-tech company overcomes T-cell immunosuppression, and develops the second-generation OVIS™ platform. It will submit the IND to the K 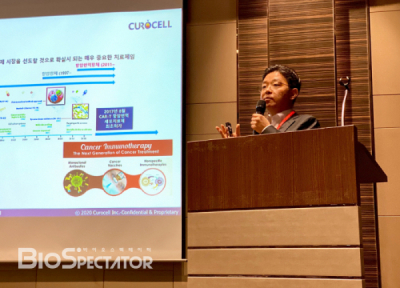 The next-generation CD19 CAR-T, which is developed to overcome the limitations of the first-generation CD19 CAR-T products including Novartis' Kimria and Gilead's Yeskarta, is about to enter a domestic clinical trial. This is the story of Curocell, the first domestic CAR-T specialized biotech company in Korea. Curocell is planning to submit the IND filing to the KFDA this year and is currently in middle of establishing a GMP production facility for clinical preparation.

Such attempt by Curocell offers several meanings. With an encouraging response rate of 90% complete remission (CR), which can eliminate tumors with a single cycle of therapy, CAR-T is giving hope to patients with terminal leukemia who have no alternative treatments. There are two products that are commercially available in the market, and several other CAR-T new drugs are expected to obtain new drug approval this year. Unfortunately, global pharmaceutical companies has made inroads into China and Japan, but they have not entered the Korean market yet, so CAR-T is not available to patients in Korea. The country is also lagging behind in terms of clinical development. According to the CAR-T clinical development status, there are 156 cases in the US and 187 cases in China (as of June 2019). However, Korea has no case of CAR-T clinical trial up to now, meaning a lack of technology and development experience. In such infertile situation, Curocell has vowed to develop CD19 CAR-T with improved efficacy.

CEO Kim Geon-Soo of Curocell said, “As a latecomer in the CD19 CAR-T market, Curocell has been thinking hard to come up with differentiation points. Curocell is focused on one of the limitations of the existing CAR-T technology that immune checkpoint molecule inhibits T cell activation and devised a CAR-T technology to overcome this problem. The company is preparing for a domestic clinical trial on lymphoma patients for CD19 CAR-T that can lower the expression of PD-1 and TIGIT at the same time. The company is expected to receive an IND approval later this year.”

CEO Kim made a presentation at Daejeon Promising Bio Startup Company IR Conference (First Half of Year 2020) hosted on January 9 by DailyPartners at Lotte City Hotel in Daejeon Metropolitan City to introduce the differentiation features of CAR-T program which is about toe enter a clinical trial, as well as the preparation status of clinical development.

Curocell was founded in 2017. Cofounder and Prof. Kim Chan-Hyuk Kim of the KAIST is in charge of CAR-T technology development, while Prof. Shim Hyun-Bo of Ewha Womans University is responsible for the antibody part. Until now, the company has attracted the investment worth 17.5bn KRW from investment institutions including Intervest, Mirae Asset, Time Portfolio, and STIC. Curocell is preparing to attract Series C investment within this year and is appointing a host company to prepare for public listing next year.

CEO Kim said, "What if CAR-T is not working in solid cancers? Immune checkpoint molecule is pointed out as one of the reasons." Much attention is focused mostly on PD-1, such as the expression of PD-1 reduced by shRNA or the removal of PD-1 with CRISPR, a gene editing technology. However, there are no clinical results yet." Curocell adds one more step here.

Curocell's core technology is the OVercome Immune Suppression (OVIS™) platform to overcome immune suppression caused by the exhaustion of T cell. The company knocks down the expression of specific immune checkpoint molecules in CAR-T using a non-gene editing technique called shRNA technology which breaks down the mRNA of specific genes. Unlike an approach using gene editing technology, the existing CAR-T manufacturing process can be directly applied.

Curocell's OVIS™ technology has evolved from the first generation to the second generation. Cofounder and Prof. Kim Chan-Hyuk invented an idea called CD19 CAR-T with the reduced expression of PD-1 in the early 2010. The second generation is CD19 CAR-T with the reduced expression of PD-1 and TIGIT, and to be specific, it has the form of applying the second generation 4-1BB-based CAR-T platform to CD19 with FMC63 sequence. CEO Kim added, "There is a background story behind the development of the sophisticated OVIS™ technology. We were so concerned about whether the first-generation CAR-T could produce clinically significant improvement effects. This concern has led to the development of the second-generation CAR-T that inhibits other immune checkpoint molecules."

The implementation process was also faced with obstacles. CEO Kim said, "The idea of inhibiting two kinds of immune checkpoint molecules is simple but its implementation in T cell is not easy. For instance, proliferation was significantly reduced when two kinds of immune checkpoint molecules were inhibited in CAR-T. Drug design and sequence have been optimized through trials and errors." Curocell applied for a PCT patent on the technology last year. 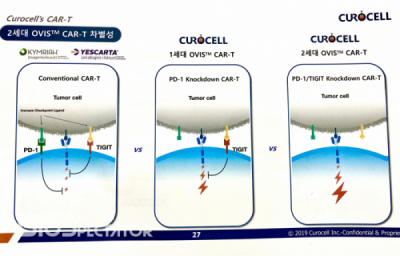 Corocell has found two core data in the non-clinical trial. First, the lymphoma rat model revealed that the first generation OVIS™ CAR-T had superior properties of removing tumors compared to the existing CAR-T. Second, TIGIT was the only one that showed synergistic effect when PD-1 and specific immune checkpoint inhibitors were suppressed in the development process of the second generation of OVIS™ technology. Kim added, “Other immune checkpoint inhibitors than TIGIT produced rather disappointing results.”

Curocell's approach is supported by clinical evidence. According to the report by Cancer Immunology, the expressions of PD-1 and TIGIT were particularly high in effector T cells isolated from the tissues of patients with B-cell non-Hodgkin's lymphoma (NHL)(doi: 10.1158/2326-6066.CIR-18-0351). In addition, the anti-cancer efficacy of these cells was reduced by a significant degree. The research team suggested that it require an approach to inhibit PD-1 and TIGIT at the same time to produce an effective anticancer efficacy.

Curocell's another differentiation feature is its manufacturing technology. Curocell set up a manufacturing process in accordance with GMP standards. The entire period from blood collection from patients with hematological cancer to production of the second generation OVIS™ CAR-T usually takes seven to eight days. However, QC period is separate. The company has a semi-automation process by introducing state-of-the-art equipment, and a closed system is used to minimize exposure to air in the process of manufacturing products. The approach is intended to increase safety, reliability and efficiency while minimizing product contamination by simplifying the manufacturing process.

CEO Kim said, "We have produced 80 batches so far and tested product production using samples collected from 15 patient. As a result, we succeeded in producing products with uniform clinical scales which contain more than 99% T cells. We have secured data about indicators such as consistent cell numbers, viability and cytotoxicity."

Curocell is now building a production facility appropriate to GMP standards on a 160-pyeong space at Samsung Seoul Hospital, and the construction is going to be completed in the early 2020. Also, the company has already designated professional employees within the company: Process Team (three persons), Analysis Team (four persons), and Clinical Trial Team (two persons). In 2018, Curocell scouted Prof. Park Jae-Hong of Memorial Sloan Kettering Cancer Center (MSKCC), the globally renowned researcher in CAR-T clinical trial as a member of its Scientific Advisory Board (SAB). The company has taken over knowhow about how manage side effects caused by CAR-T, clinical design and efficacy evaluation. In addition, the company is collaborating with Clinicians Ko Young-Gil and Kim Jung-Ran of Seoul National University Hospital.

CEO Kim said, “We are planning to submit IND filing to the KFDA this April. And we expect to obtain approval in the third or fourth quarter." Curocell will speed up the development of follow-up programs with an ultimate goal to target solid cancers.”