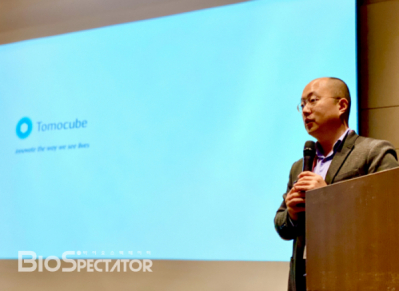 Grafting AI technology upon existing data of pathological images now transforms the market of diagnosis. Machine learning of a vast number of images by computer helps the diagnosis with analyzing degree of invasion of tumor cells by identifying manifestation of PD-L1 in the stained pathologic tissues. It is a technology called ‘Digital Pathology’ by which the automatic diagnostic process promotes the diagnosis conducted by doctors in clinics efficiently. The overseas enterprises representing the technology include the Verily of Google and Allen Institute, whereas there are domestic companies such as Lunit and Vuno.

Tomocube introduced the new concept of ’Digital Pathology’ to the market and is expanding its domain from a current market of research to a market of diagnosis. Currently, contrary to focusing on tissues by enterprises of pathological diagnosis based on AI, Tomocube focuses on the diagnosis exploiting phenotypic information of cells or internal-/external phenotype of microorganisms. Thus, the market thereof differs from current market of enterprises based on AI technology. There are also other differentiating points.

The information itself, to be inputted for the AI analysis, is different. Contrary to the existing companies focusing on analyses of 2D images of stained tissues according to predetermined processes in pathological department, Tomocube focuses on the real-time label-free analysis free from a staining process by analyzing cellular phenotype based on information of refractive index (RI) obtained through ‘HoloTomography (HT).’

“Tomocube will become the company providing biomarkers. Biomarkers, such as genetic sequence information and membrane manifestation protein etc., have been contributed to the diagnosis of diseases so far however the information of phenotype thereof has been missing. Tomocube excavates the phenotypic biomarkers based on 3D cellular images, and intends for the commercialization thereof eventually targeting markets of accompaniment diagnosis and immuno-anticancer therapeutics simultaneously for the precision medicine. The 3D cellular images will be quantified for the development of biomarkers, which had been difficult to find biomarkers using conventional methods.”

YongKeun Park, the head of research laboratory (CTO), recently met with reporters from Biospectator and introduced the market strategy of the company developed for the market of diagnosis. The CTO Park studied the technology of holotomography and founded the Tomocube Inc. together with President Hong Gi-hyeon in 2015 upon seeing prospects of the market. President Hong Gi-hyeon has concluded successful M&As of two companies including the company developing optical prediction equipment for semiconductors before the foundation of Tomocube.

Tomocube released the holotomographic microscopes, HT-1 and HT-2, in 2016 and 2017, for research purposes since its foundation. In this year, the company intends to expand its market from research disciplines to clinical applications for the release of new products applicable to clinical diagnosis and examination. The products will be configured with an embodiment enabling convenient automation and high-speed analysis for the diagnoses of laboratories in hospitals. Tomocube also intends to target the data business by grafting AI technologies upon hotomographic technologies developed spontaneously. The diagnostic projects comprise 3 researches on ‘Diagnosis of Septicemia,’ ‘Diagnosis of Acute Myeloid Leukemia (AML),’ and ‘Excavation of Immuno-Anticancer Agent Biomarkers.’

The concept of Digital cytology

Currently, the pathologists in the department of pathology are supposed to make final (definite) diagnoses. For which, the biopsy specimens (tissues) of patients are fixed, sliced by approximately 4 μm in thickness, stained with dyes, and then read. The process above requires 2~3 days, and it would take approximately a week to get results of the diagnosis. The concept of computer-aided diagnosis (CAD) using AI, which is currently developed by Verily of Google, encompasses the support for making diagnosis by doctors by the machine learning of Big Data of images of microscopes, CT, and MRI. By which, the time required for making diagnosis and accuracy therefore can be improved.

However, there are limitations in this approach. The CTO Park explained, “… the times required to reach diagnoses could be counted as problems, but what is more troublesome is the difficulty in normalization of images to be learned by AI. Depending upon the amount of dyes spent for the capturing images, the resulting contrast of images varies, and eventually renders varied information of staining as times goes by.”

As a means to get over the problems of reproducibility, Tomocube exploits the images of holotomography developed spontaneously. The holotomographic microscope can capture real-time 3-dimensional images of live tissue without the need of a staining process (label free), as compared to a conventional microscope. Besides, since the holotomography enables making images based on the value of intrinsic amount of a substance, the refractive index (RI), it renders identical images regardless of people making pictures. The CTO Park explained, “… the biological meaning of refractive index is a concentration. To know the refractive indices is to obtain quantitative values, the mass of cell organelles can be obtained by calculating the volume..”, “…. that is, the capturing of holotomograhic image would render volume, concentration, and mass thereof.” 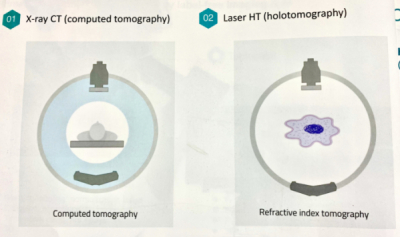 Based on the above feature, the Tomocube intends to focus on the ‘digital cytology’ based diagnosis. Currently the field is free from competitors, and the term, ‘digital cytology,’ was coined by Tomocube. Basically, Tomocube intends for the efficient diagnosis through saving times required for making diagnosis by doctors in clinics by grafting AT technology thereon. The CTO Park explained, “… the reason why we are focusing on cells rather than on tissues is to attain high definition 3-dimensional images of cells comparing to 2-dimensional images employed in conventional pathological diagnoses. This will enable us focusing on diagnosis using cellular phenotype.”

Currently, Tomocube focuses internally on the development of AI tools for the diagnosis. The CTO Park explained, “… AI is a tool for statistical analysis. That is, depending upon the objective oriented design based on sound hypotheses and good data, AI technology can be efficiently exploited and …”, “… Tomocube intends to become the enterprise seeking for new biomarkers resulted from the integration of Big Data and AI technology based on quantified 3-dimensional data.”

Another point emphasized by Tomocube is the accumulation of data. The CTO Park stated, “… we are accumulating data by the collaboration with diverse institutions to expand the domain of diagnostic market. Diverse images divided by different criteria including types of cells, cell stains, and patients etc. are being measured, and currently we have secured the data corresponding to over 1 million pictures in the data server…’, ‘… they are the important asset for us to get over the next stage for our business. The internal library of sought biomarkers of key diseases is currently developed, and simultaneously, we are developing plans for providing the open-source that will enable external researchers to use our services.”

Tomocube founded its 100% subsidiary company in Boston, USA, the American incorporation of ‘TomoDX,’ last November to get steps for future clinical trials and approvals for the market in USA wherein Elena Holden is in charge of the representative.

Tomocube targets the market of septicemia with its initial results of research on diagnosis. The process of culture of microorganisms in blood will be omitted or abbreviated to realize the prompt diagnosis. Positive results of initial research therefor were also obtained. A total of 5,041 3-dimensional images were secured and put into deep learning process, and succeeded in the classification of 19 different species of bacteria in seconds with the accuracy of 95%. In addition, the two properties of anaerobic/aerobic and gram negative/gram positive attributes of bacteria, were also distinguished with respective accuracies of 97.5% and 98.2%. 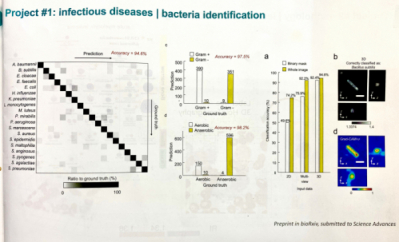 And as a next step, Tomocube observed positive results that would enable the discrimination of antibiotics sensitivity without the treatment of drugs in the research of an initial AST Test. Currently, diverse drugs and diverse species are being tested.