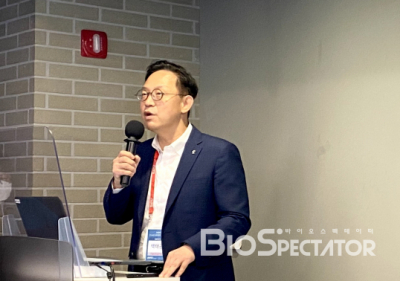 Arum Therapeutics was founded last year and has been focusing on the development of targetable therapeutics for cancers and rare diseases, emerged its appearance. The name of company, the “Arum”, which is a traditional Korean, signifies the “Wisdom and Knowledge to be protected by God”.

Arum Therapeutics is a company with strength in the development of new drugs based on medical chemistry, wherein the efforts of the company have been focusing on the development of inhibitors targeting the synthetic lethality of cancer diseases, unmarked oncogenes that induce the growth of cancer, and the mechanism preventing immunity regarding the development of immunotherapeutic options. As a leading project, the company currently focuses on the optimization of the ‘lead’ of Chk2 Inhibitor, a candidate material expected to overcome the PARP tolerance.

Taegon Baik, the CEO of Arum Therapeutics, announced the vision and projects of the company at the ‘‘D'LABS DEMO DAY’, held June 18 at the ‘Seong Hong Tower’, at Gangnamgu District, Seoul, hosted by ‘DAYLI Partners’. Arum Therapeutics. invited investment from ‘Daily Partners’ in April, and was appointed as one of the enterprises commissioned as the TIPS National Projects. The company opens its ‘Research Laboratory’ in Magok in July.

Baik explained, “… Arum Therapeutics. will be equipped with core competences in the ‘Lead Optimization’ and ‘Pharmacological Assessment’ spontaneously this year, for which we have established the ‘Strategic R&D Partnership’ with several domestic enterprises...”, “… it is the business model to be cooperating with the initial preclinical trials and then getting out of pertinent license..”.

Baik opened the three projects to the public on that day. Two of the projects are currently at the stage of ‘lead optimization’ from which the candidate materials for the preclinical trials will be extracted, while the remainder of the third project is at the stage of ‘hit-lead excavation’.

Arum Therapeutics particularly focuses on the field of synthetic lethal targets. Baik explained, “… the understanding of the concept of ‘synthetic lethality’ is the key. It is the concept inducing destruction of cancer cells by inhibiting two targets to prevent the repair of damaged DNA associated with the formation of cancers…”, “… for which, we have the ‘Olaparib’, the representative PARP inhibitor, … we are expanding targetable diseases such as breast cancer, ovarian cancer, and prostate cancer etc. for which the drug is efficacious”.

What is problematic is the consequential tolerance of PARP inhibitor appearing eventually. Baik explained further, “…as one of major causes of the appearance of tolerance, the function of homologous recombination (HR), which had been destroyed by BRAC variation etc., is recovered again by an activation of several signal transduction …”, “… there are ATM, ATR, and WEE1 etc. as representative by-passing routes, for which the drugs, targeting these, are being developed…”.

Then, what is the reason behind Arum Therapeutics Inc. interest in Chk2 which has been spotlighted as a target to overcome tolerance of the PARP inhibitor? Baik stated, “… Recently, the biology of Chk1 and Chk2 etc. have been identified wherein the domains of involvement of the two drugs are different …”, “… in particular, the feasibility of development of Chk2 is spotlighted as a drug enabling co-administration with PARP inhibitors…”.

In regard to its mechanism, it was explained that the domains of Chk2 SCD and PARP1 BRCT can interact with each other thereby the signal transduction of HR repair can be activated. Additionally, the phenomena, wherein the Chk2 would be activated despite the inhibition of PARP1 activation, and the PARP1 activity, inhibited by the inhibition of Chk2 activity, were spotlighted.

Arum Therapeutics currently evaluates the efficacy of co-administration of ART-100, chemical anticancer agent, and PARP inhibitor on the level of cell strain for several strains of cancer cells. Baik explained, ”… we anticipate the expansion of targetable diseases for which the medication would be efficacious through the co-administration of the PARP inhibitor with Chk2 inhibitor beyond the BRCA variation..”, “.. we are currently searching for compounds of inhibitors, in that the excavation of such materials, with higher selectivity of Chk2 to reduce the risk of adverse effect, is important…”.

The ART-300 of the second project is the RIOK1 inhibitor.

The biological function of RIOK1 is essential for the biosynthesis of ribosome which is crucial for the growth and proliferation of cells. In fact, it was explained that the RIOK1 was noted as favorable target for cancer through results of the research that reported the increase in biosynthesis in cells of breast cancer, wherein the activities of pRb and p53 were degraded.

Baik explained, “… Arum Therapeutics intends to develop the RIOK1 inhibitor for RAS variant colon cancer…”, “… yet, no RIOK1 inhibitors are present for the clinical trials…, and due to the characteristics of RIOK1, the development of assay and structure thereof is difficult…”. Currently, the company has initiated efforts for the development of assay, and is targeting the lead optimization this year.

The third project comprises the ‘ART-300’, the PI4K IIIβ inhibitor introduced from the Chemical Research Institute. There are more than 160 serotypes for human rhinovirus; yet, there are no therapeutic agents for the inhibition thereof.

Arum Therapeutics Inc. currently develops the drug, targeting COPO and asthma of which symptoms are aggravated by the infectious disease of human rhinovirus; the formulation enabling the administration through inside of the nasal cavity is developed by considering the characteristics of the drug. Currently, the efficacy of drug is being evaluated by using in the vivo model (CVA10), and the development of drug aimed at the IND in 2022.