Co-founded in 2018 by the five researchers from Celltrion, and succeeded in the invitation of investment of 12.7 billion KRW for the ‘Series A’ … the company develops the New Drugs for the small cell 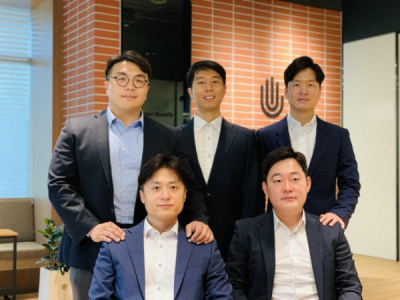 “Uppthera is a venture company founded by researchers of experiences in clinical application, authorization, and patent application etc. from the initial discovery of new drugs in the division of ‘New Drugs Development’ of the Celltrion. Uppthera challenges the development of PROTAC-based innovative new drugs…”. President Si Woo Choi CEO of the company, introduced his venture company as noted in the above statement in the meeting with reporters from The Biospectator, in the ‘Laboratory Attached to the Company’, located in Songdo, Inchon Metropolis.

Uppthera was co-founded recently by the five researchers including the President of the company: Soo hee Ryu(CDO), Ji Hoon Ryu(CSO), Hwa Jin Lee(COO), and San Ha Son(CBO). Uppthera selected the ‘Proteolysis Targeting Chimera (PROTAC)’, which is being spotlighted as a new modality in the field of ‘New Drugs Development’. The company currently promotes the development of the ‘New E3 Ligase (E3L) PROTAC Platform’ upon excavation of the three innovative PROTAC-based new drugs through the collaborative co-research of experts during the past 2 years after its foundation.

Uppthera succeeded in the invitation of investment of 12.7 billion KRW for the ‘Series A’ this month that enabled the company to expedite its research efforts on PROTAC. The SBI Investment, IMM Investment, Enlight Ventures, Albatross Investment, Midasdong-a Investment, and KDB Capital etc., all participated in the investment as well.

Uppthera develops the ‘Proteolysis Targeting Chimera (PROTAC)’ through the fast-track for target proteins and target protein binders, and the long-term strategy. Separate from the approach, the company also promotes the development of a platform for the New E3 Ligase. Wherein, the company intends to examine the presence of an already developed 'chemical inhibitor (known binder)' capable of combining with corresponding protein upon determination of the target protein of corresponding disease, which is to be disintegrated by applying the concept of PROTAC.

① In the case of the identification of presence of a known binder with its availability as a PROTAC target protein binder, then the steps of Examination on Risk of Patents → Synthesis in the Form of PROTAC → In Vitro/In Vivo POC, will be followed; whereby these actions constitute the fast track of a rapid development of PROTAC.

② In the event of a reinforcement of business (improvement in effectiveness + patentability reinforcement), this strategy is needed for the target protein of corresponding disease through the POC identified rapidly by using the ‘known binder based PROTAC’, then the excavation of new target binder, as well as to make the binder as PROTAC, is attempted. This is a strategy of converting ‘fast track’ to ‘long-term track’.

③ In cases of the absence of known binders, then it will be the case that a new target protein binders will be excavated and then synthesized in a format of PROTAC. Though the case could be considered as that of a ‘long-term track’, it could embrace a great value as the ‘First-in-Class’.

President Si Woo Choi explained, “… the advantages of the business model of Uppthera are the quick identification of unmet needs in diseases, rapid commercialization of needs of technology in the form of PROTAC, and transfer of pertinent technologies..”, “… the key to our business model consists in the trust of customers (the companies) buying technologies in our data, therefore we are operating the department in charge of the quality of our data…”.

Based on this strategy, Uppthera secured three pipelines comprising the diseases of small cell lung carcinoma, hyperlipidemia, and multiple myeloma. Additionally, the PROTAC therapeutics for small cell lung carcinoma and multiple myeloma are scheduled to enter non-clinical studies next year and clinical studies are arranged to begin in 2022. For the sustainable development and survival of the company developing PROTAC products, Uppthera promotes the establishment of a new E3 Ligase Platform. By taking the accounts of the three issues of the manifestation of organization-specific of E3 ligase, manifestation of E3 ligase corresponding to subtypes of cells, and manifestation of pathological cell specific E3 ligase, the company develops the most advantageous platform capable of selecting and excavating the new E3L applied to the PROTAC compounds.

President Si Woo Choi stated, “… precise selection and excavation of E3 ligase will be carried out based on the platform of the ‘Big Data’ of the single-cell RNA sequencing…”,”… the exclusive First-in-Class PROTAC platform will be developed for the company sustainably releasing the PROTAC products…”. President Si Woo Choi also appended, “… currently, the researches on PROTAC focus partially on the decomposition of proteins. Thereby the resistance of drugs will emerge inevitably along with the advancement of clinical studies…”, “… based on the strong foundation in biology, Uppthera will find solutions against the resistance of PROTAC drugs which is anticipated to be emerging in the future through the efforts in preemptive researches…”.