Kynogen is developing an adjuvant “KG-IS-001” that can be applied to various immune cell treatments such as T cells, NK cells, and DCs. 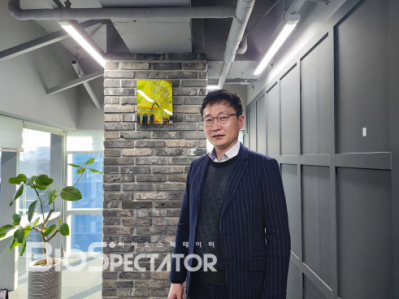 Which global pharmaceutical market is currently the largest and fiercest? Probably most people will pick the 'immuno-oncology' market. Currently, all therapeutic agents of interest are in the category of immuno-oncology drugs, ranging from immune checkpoint inhibitors such as Keytruda (pembrolizumab) and Opdivo (nivolumab) ranked among top 10 in global sales in recent years to CAR-T therapeutic drugs such as Kymriah (tisagenlecleucel) and Yescarta (axicabtagene ciloleucel).

Kynogen has also entered the market of immuno-oncology drugs. However, its market positioning is a little different. This is because Kynogen aims to develop an adjuvant-type treatment that can meet unmet needs of existing immune cell therapy products. “One of the unmet needs of current immune cell therapy products is 'economic feasibility',” said Moon Ji-Young, CEO of Kynogen." Currently, CAR-T therapeutic drugs are the last option because of its high price," he added.

After graduating from Sogang University's Department of Business Administration, Moon has worked for biotech companies in various fields such as STAR V-Ray, a medical device development company, and Psoma therapeutics, a subsidiary of Macrogen. He has also served as Macrogen's CFO and President from 2013 to 2018.

Moon said, "The bio-industry is a technology-intensive industry. Even small-scale companies might have a competitive edge. Based on the know-how gained through various biotechs so far, I want to develop treatments myself." He added, "It is attractive to create a platform that can be used for general use and to apply it in various ways. Therefore, Kynogen has started the platform business."

In the field of Immune Delivery Platform, research is being conducted using microvilli that fall off when T cells are activated. This research uses Extracellular Vesicle (EV) formed by microvilli as a delivery system for CARs or various antibodies.

CTO Hwang Seong-Soon is in charge of the immuno-metabolism drugs project. Hwang is currently a professor at Yonsei University Medical School. He was recently recruited by Kynogen. Immuno-metabolism drugs are therapeutic agents that can reduce the growth and resistance of cancer cells by blocking the pathway to obtain energy sources necessary for the growth and differentiation of cancer cells.

Moon emphasized, "Immune cells that KG-IS-001 shows the best effect are dendritic cells (DC)." Many companies are attempting to develop immune cell therapy products using DCs. However, these cells have lower anti-cancer effects than other immune cell-based treatments. Since Dendreon's Provenge (sipuleucel-T), which was approved by the FDA in 2010, interest in DCs treatment has declined.

In later animal experiments, Kynogen compared the anti-cancer capacity of DCs to which the KG-IS-001 protein was additionally administered and normal DCs. In this experiment, the tumor reducing effect of DCs with additional administration of the KG-IS-001 protein was better than that of normal DCs. Kynogen confirmed similar results in metastatic cancer models and found that KG-IS-001 could increase the anti-cancer capacity of DCs. Currently, Kynogen is in the process of verifying PoC (Proof of Concept). 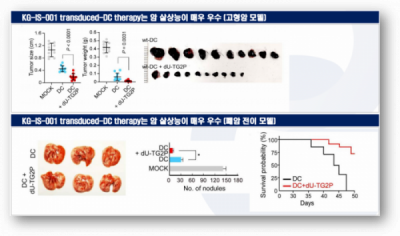 Kynogen first confirmed the effect of KG-IS-001 in T cells earlier than in DC. This is because there are far more treatments using T cells than DC treatments. As a result of animal experiments, KG-IS-001 has improved its anti-cancer ability even in T cells. However, this result is not significant because CAR-T therapeutic drugs already has an excellent anti-cancer ability.

Instead, Kynogen devised a new way to introduce KG-IS-001 through T cells. To this end, when KG-IS-001 was introduced into T cells, Kynogen used two methods to see the difference in anti-cancer capacity changes: a method using a retrovirus and a method of directly injecting a protein. The method using a retrovirus is a method currently used when making CAR-T therapeutic drugs. The method of directly injecting proteins is a method developed by Kynogen.

The gene introduction method using viruses such as retrovirus or lentivirus is used in CAR-T or gene therapeutic drugs. However, such method has steadily raised issues in terms of safety. This is because the virus that enters the cell has the potential to cause random mutations. The difficulty of producing viruses is also a hurdle in the development of therapeutic drugs using viruses.

Moon said, "There is a risk from the introduction of the virus to the existing CAR-T therapeutic drugs. We have been concerned about this risk and conducted a study to use the protein injection method.” With the protein injection method, KG-IS-001 protein is separately expressed externally and then directly injected into T cells. Moon continued, “The protein put in from the outside is naturally decomposed after a certain time. There is also a judgment that if we can maintain the stability of the protein for as long as we want, it would be better to let it decompose and disappear after that.”

As a result of treating T cells with KG-IS-001 introduced into a breast cancer model using the two methods, both methods showed similar anti-cancer ability. With this, Kynogen has set up a method to introduce KG-IS-001 into T cells without using a virus. Kynogen is also introducing KG-IS-001 by protein injection into DCs.

In addition to research on the protein injection method of KG-IS-001, Kynogen is confirming its anti-cancer ability by applying this method to CAR-T, NK, and so on. It is collaborating with various domestic and foreign partners. 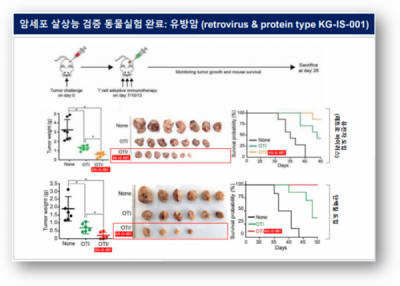 ◆Microvilli: An immunotherapy delivery platform with a new mechanism

When the immune function of T cells is activated, 'microvilli' will protrude from T cells. Professor Jeon has found these new features of microvilli. At the end part of the microvilli, major components such as TCR necessary for T cells to function in the immune system are concentrated. This part can also be separated. Isolated microvilli can form endoplasmic reticulum and float around, transmitting signals from T cells to other immune cells or interacting with APC (doi: 10.1038/s41467-018-06090-8).

Kynogen is developing an endoplasmic reticulum released from microvilli as an immunotherapy delivery platform. Moon said, “After activating by expressing CAR in the master cell, components of the microvilli that fell off are analyzed. This component contains all proteins such as CD19 protein necessary for CAR expression. In addition to CAR, the goal of Kynogen is to make it a delivery platform that can deliver desired proteins.” In addition, Kynogen is expected to be able to regulate mass transfer itself because microvilli endoplasmic reticulum is formed only when immune cells are activated. 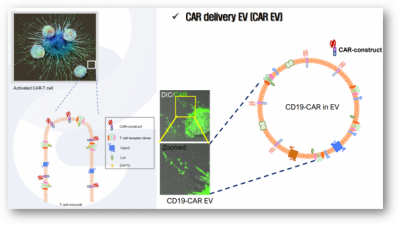 The development status of immuno-metabolism drugs in the global market is as follows. In 2017, Agios Pharmaceuticals received FDA approval for a leukemia drug Idhifa (enasidenib), which acts by inhibiting IDH of the TCA (Tricarboxylic acid) cycle, an energy generating circuit. In addition, many pharmaceutical companies such as Novartis, Astrazeneca, Genentech, and GlaxoSmithKline(GSK) are researching immuno-metabolism drugs.

Kynogen is also developing immuno-metabolism drugs, which are attracting attention as next-generation anti-cancer drugs. Kynogen selected genes that showed high expression only in the non-responding group through genome analysis for the responding group and the non-responding group for the anti-PD-1 drug. By targeting genes involved in metabolic mechanisms, candidates’ deriving process is currently underway. Moon said, "In the target selection process, high-risk novel targets are excluded."

The first target of Kynogen is a mechanism that cuts off the supply of “Serine”. Serine plays a key role in the folate cycle, which is an important cellular metabolic cycle in the synthesis and methylation of DNA bases. This serine is produced from 3-phosphoglycerate (3PG) through a single carbon metabolism process. Kynogen is developing 'KG-IM-001', an anti-cancer drug that suppresses the synthesis of serine by targeting this process.

Studies have shown that the survival rate of cancer patients decreases when the mechanism of a single carbon metabolism is active. In addition, when the mechanism of single carbon metabolism is inhibited, anti-cancer drug sensitivity is increased and anti-cancer drug resistance can be overcome for various solid and blood cancers. Moon said, "The research team of David M. Sabatini, a leading global group in this field, is also researching on the same target." "Currently, Kynogen is designing inhibitor drugs with Professor Han Gyun-Hee. Hit compound is being derived while conducting efficacy evaluation."

The second target substance of Kynogen can re-promote the suppressed immune cell function in the tumor microenvironment (TME) (KG-IM-002). Currently, Genentech has patented a synthetic material with the same target. To speed up the discovery of new drugs, Kynogen signed an AI-based drug development partnership with PharmCADD in January of 2021.