A key keyword of Geninus, single-cell analysis technology platform's strategy to implement precision medicine...aim KOSDAQ IPO in the second half of the year to collect genomic data 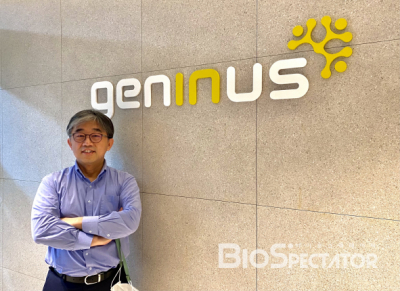 The concept of genomic analysis in precision medicine is increasingly evolving. For the past five years, the focus has been on the concept of diagnosis to find an appropriate treatment by analyzing the patient's genome. And it is now moving on to understanding and applying biological phenomena that have never been known in human genetic big data.

Regeneron Pharmaceuticals is a pioneering flagship company. Regeneron established the Regeneron Genetics Center (RGC) in 2014 and has been discovering new drug targets across multiple diseases including cardiovascular disease, liver disease, and obesity through large-scale sequencing and analysis programs. There were also milestones in which Regeneron analyzed genetic variation and cardiovascular diseases in up to 60,000 human genomic data to find the target of treatment called "ANGPTL3" and was licensed to market antibodies as a treatment for hereditary hypercholesterolemia this year.

In Korea, Geninus is a company that meets the keyword of precision medical genome analysis. Geninus is a company that was spun off from Samsung Genome Research Institute (SGI) at Samsung Seoul Hospital in 2018. Although it has been established for three years, its products, hundreds of papers, technical skills, and vision developed based on data accumulated by Samsung Genetic Research Institute are as good as global genomic diagnostic companies.

“The number of cancer patients continues to rise, and also the number of surviving patients is increasing due to the development of treatments such as targeted treatments and immuno-oncology drugs," Geninus CEO Woong Yang Park told Biospectator at an interview. "The blood and tissue-based diagnostic market will continue to increase," he said. “Compared to its competitors, Geninus differs from its competitors in its content and analysis panel that reflects the characteristics of Asian ethnicity, and this is our global growth strategy. Asians make up half of the world's population, but less than 10% of public genomic data. Our goal is to become one of the top 10 global companies in the future.”

The key to differentiate Geninus from now on is the single-cell RNA sequencing technology platform. CEO Park said, “Single cell analysis will move on to the realm of diagnosis. When the NGS cancer panel was first released, it was several million won, but as it is now used in the clinical sites, single cell analysis is expensive now, but the price will be lowered. We still don't know what biomarkers and what kind of cells we should see, but we have a goal of creating a single-cell diagnostic market, and will expand to discover new drug targets in the future.”

The existing tissue biopsy diagnostic market is expanding to liquid biopsy due to unmet medical needs. Geninus is expanding its R&d portfolio from liquid biopsy companion diagnostics to early diagnosis and diagnosis that monitors whether cancer recurs after a patient has received treatment. Although the market for early diagnosis is large, it is believed that there is a limit to just measuring circulating tumor DNA (ctDNA) in the blood, which was the focus of early global early diagnosis companies. To overcome these limitations, various analysis techniques are being applied.

Single-cell sequencing is a technology that literally analyzes the gene expression profile in each cell unit. It will analyze about 2,000 genes of 4,000 to 5,000 cells in a particular sample. So far, if we have looked at the average value of all genes, single-cell sequencing has an advantage in that it can find specific cell types or pathological mechanisms that cause disease.

CEO Park said, “We have been conducting single-cell research since the Samsung Genome Research Center in 2013, and I think we are one of the leading groups in the global market. But it has been a research purpose before, and as single-cell research has become more common, the need for single-cell analysis has begun to increase in clinical trials. Immunotherapy clinical trials need to analyze whether there is a difference in the patient's immune cells, and RNA analysis through single cell analysis can provide more information. For example, RNA information can specify whether CD8+ immune cells infiltrating tumor tissue are actually functioning.”

Single-cell genome analysis can also be applied to ▲diagnosis ▲to discover new drug targets. CEO Park said, “I think that single-cell information will be used for patient diagnosis in 5 or 10 years. This is because it is more accurate. I think it will be similar to the panel at first, and it will be developed in the same form as the companion diagnosis.”

Geninus is building a single cell analysis technology in the form of a platform. Geninus has a concept of developing biomarkers that can predict drug response rates through genetic data and single-cell sequencing analysis on pre- and post-treatment tissue/blood samples of people who respond to drugs and those who do not. In this way, Geninus conducted more than 200 studies on its own single cells last year and is building data on about 1 million cells estimated at 5,000 cells per case.

As part of that, Geninus also signed a partnership with Ocean Genomics of the U.S. to jointly develop RNA-based biomarkers in March of this year. Ocean has AI-based RNA gene expression analysis technology, and Geninus has expertise and data in translation research. Geninus is in partnership with SK Telecom and biotech such as 1st Biotherapeutics and Azoth to discover biomarkers and new targets.

Geninus is preparing to be listed on the KOSDAQ to take a leap forward. In the second half of the year, the company plans to file an initial public offering (IPO) by filing a request for a preliminary examination for listing on the KOSDAQ. To this end, in December of last year, Geninus' Chief Financial Officer (CFO) recruited Korea's leading pharmaceutical and bio-analyst, Managing Director Koo Wan-seong.

Geninus plans to use the funds raised through the KOSDAQ listing to collect data. CEO Park said, “In the genomics field, data generation itself costs a lot of money. Nevertheless, since the single cell field is our competitive edge, we plan to invest a lot of money to collect data. In the long term, Geninus aims to become a genome diagnosis company that best reflects the characteristics of Asian races,” he said.