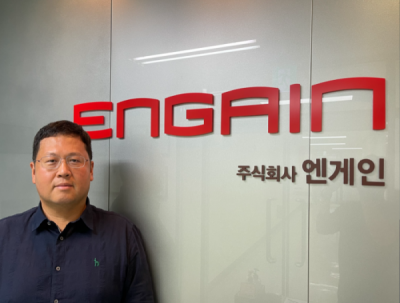 ENGAIN introduces itself as a 'chemical technology' based medical device company.

In the early years of its establishment in 2012, ENGAIN was developing a hydrogel-based recognition sensor for biometric information such as blood sugar. Young-guk Koh, CEO of ENGAIN, said, “While conducting research on synthetic polymeric hydrogels during the three years of initial development, we found a market where ENGAIN’s accumulated polymer chemical technology can be applied.”

Based on the results of researching the domestic market, CEO Koh first attempted to apply the inhouse chemical technology for polymer synthesis to an embolic agent for liver cancer treatment. He expected that the inconvenience of the embolic agent that had been used previously could be resolved with ENGAIN's new agent. He had that much confidence in ENGAIN's chemical technology.

Currently, ENGAIN's lead product, embolic agent for liver cancer, has achieved 90% domestic market share within three years of its launch. On the success of the first medical device, CEO Koh said, “Compared to overseas multinational companies, ENGAIN is small and a latecomer, but the biggest competitiveness is that the company has the original technology and product development capabilities”.

ENGAIN has attracted investment fund of a total of 19.5 billion won with Series A in 2016, Series B in 2017-2018, and Series C in 2020. Although it is currently in the preparation stage for an initial public offering (IPO), CEO Koh planned to strengthen its product lineup for achieving 150 billion won in sales as a long-term goal of ENGAIN at the same time as the IPO. ENGAIN plans to further secure more than 10 medical device products within 5 years. 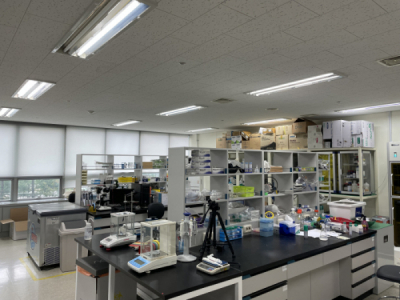 The field that ENGAIN first challenged to develop was a gelatin embolic agent for liver cancer embolization. Transcatheter arterial chemoembolization (TACE) is a procedure in which an anticancer agent and an embolic agent are injected through a catheter to block blood vessels in the patient's tumor area, preventing substances other than the anticancer agent from interacting with cancer cells. When blood vessels are occluded, oxygen and nutrients, etc. cannot be supplied to the cancer cells and the cancer cells necrotize. Therefore, TACE is used as a standard treatment in Korea because cancer can be treated without a separate operation.

Most of the early domestic TACE is a method to occlude blood vessels by cutting the pad with an embolic agent in the form of a gel pad and inserting it into the blood vessel. In this case, there was a shortcoming in that it was difficult to physically cut the pad into a small size when thin blood vessels were required to be occluded.

The biggest difference between EGgel and existing embolic agents is that, based on the 'solubility' of gelatin, EGgel has been developed as a product suitable for TACE, which requires repeated procedure by using an embolic agent that is decomposed after occlusion and that can re-open blood vessels.

After 3 to 4 weeks after occlusion of the blood vessel, the gelatin is completely decomposed in the body to induce revascularization of the occluded blood vessel. One of the strengths of EGgel embolic agent is that it can be treated repeatedly through the same blood vessel. CEO Koh emphasized, “EGgel is currently being sold to 91 general hospitals nationwide, which have angiographic equipment, and achieved 90% of the liver cancer embolization product market share was achieved within three years of sales.” 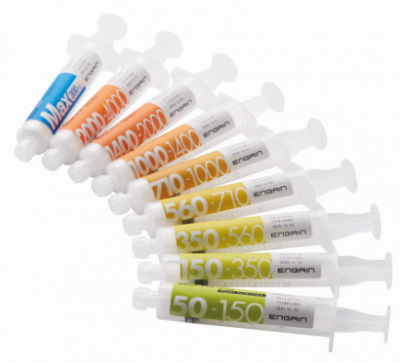 ◆ Development of a derivative product with different dissolution rates, 'IPZA', an embolic agent for chronic pain, "developed for the first time in the world"

ENGAIN found that the dissolution rate of gelatin can be set differently depending on procedures by controlling the chemical cross-linking of gelatin, thus started developing a derivative product that can apply this.

The concept of ‘treating chronic pain through blood vessel occlusion’ may sound a bit strange, but it is also a treatment that has already been recognized for its efficacy by domestic and foreign medical field a long time ago.

Embolization for chronic pain began with the theory of Japanese physician Okuno Yuji. According to Okuno Yuji, abnormal microvessels that did not exist before in chronic musculoskeletal pain site were synthesized through 'hypervascularity', and new nerves were created around them, causing pain. Okuno Yuji induced occlusion by administering a mixture of an embolic agent and an antibiotic to an abnormal blood vessel synthesized in the chronic pain area, and confirmed that the pain felt by the patient was significantly reduced.

CEO Koh explained, "After much trial and error, a gelatin particle that can be dissolved in vivo within 24 hours after administration has been developed." Based on this, ENGAIN was able to develop the world’s first ‘IPZA(particle)’, an embolization medical device for chronic musculoskeletal pain.

The IPZA has been approved for a grade 3 medical device by the Ministry of Food and Drug Safety, and has been registered as a new medical technology in the Korean National Evidence-based Health Care Collaborating Agency for marketing. 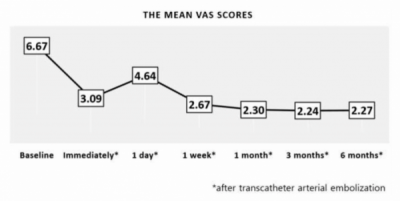 ◆ Challenged in the 'sticking field', developed medical adhesives.. Completed reimbursement registration in March of this year

The field of medical devices, which ENGAIN has challenged for the second time, is a 'cyanoacrylate'-based medical adhesive. Medical adhesive is a medical device that can physically suture or bond tissues caused by surgical incisions or wounds. It is used for bonding wounds that require urgency, etc.

However, the biggest problem was controlling the polymerization time and adhesive strength depending on the components of the adhesive. The medical adhesive component 'Butyl cyanoacrylate' has a short polymerization time and high adhesive strength, but it has a disadvantage in that it hardens at the bonding site, the surface of the adhesive crumbles, and falls off from the suture site. Whereas, it has a disadvantage that octyl cyanoacrylate, a similar bioadhesive component, hardens more slowly than butyl cyanoacrylate, and it takes a long time to fully adhere, thereby taking a long time for the procedure.

As a result of thinking head-to-head with the ENGAIN Chemistry Research Institute, it was possible to develop 'EGglue', a product that hardens quickly after contact with air and maintains optimal adhesive strength with appropriate tensile strength.

ENGAIN's EGglue received approval from the Ministry of Food and Drug Safety last year. In March of this year, the reimbursement registration of the domestic medical device grade 3 adhesive for epidermal bonding has been completed. In July, a domestic sole distributor contract with Dong-A ST was signed, and supply to specialized hospitals including tertiary hospitals such as university hospitals was started. 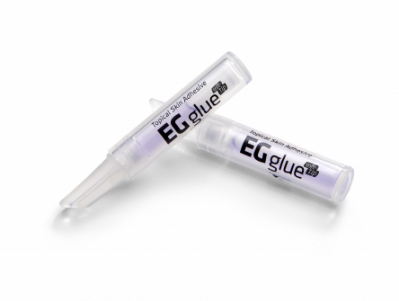 ◆ Developed varicose vein treatment kit, expected to be approved by the Ministry of Food and Drug Safety at the end of this year... Competing with US Medtronic

Varicose vein is a disease in which venous blood vessels protrude out of the skin due to abnormalities in the veins of the legs. The existing treatment for varicose veins is to remove the protruding blood vessels using various methods such as surgical operation (stripping), radio frequency, and laser therapy. However, stripping requires anesthesia because of the skin incision process, and scars may remain at the incision site or nerve damage may occur after the operation. In the case of laser therapy, tumescent anesthesia is given to the patient before the procedure, which can cause pain after the procedure, and there are still disadvantages of skin burns due to high heat, the risk of nerve damage, and the need for additional treatment through wearing compression stockings.

To overcome these shortcomings, ‘VenaSeal’ from medical device company Medtronic has been on the market since 2015 in the United States. VenaSeal is a method of inducing vascular occlusion by injecting medical glue of cyanoacrylate component similar to that of EGglue into blood vessels. ENGAIN explained that there are few complications such as skin damage and nerve damage caused by procedures using laser and radio frequency, it does not require tumescent anesthesia is used, and the recovery period is short, which has the advantage that the patient can quickly return to daily life after the procedure.

CEO Koh explained, “The domestic market for varicose veins is expected to have more than 3 million patients and approximately 100,000 procedures per year” and “The size of the procedure market is expected to reach approximately 60 billion won”. ENGAIN signed an exclusive domestic sales contract for VENOCCLO with Dong-A ST in 2018, and expects to receive marketing approval from the Ministry of Food and Drug Safety in December of this year. 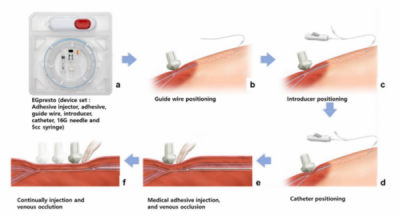