The Chungbuk Creative Economy Innovation Center(Chungbuk Innovation Center) is the operator of the Tech Incubator Program for Startup (TIPS), of which core businesses are promote entrepreneurship of bio-start-ups and support would-be start-up founders.

The TIPS is a private sector-initiated program that selects start-up teams with excellent technology potential, introduces them to investment operators, and provides them with government assistance. The center has attracted investment from LG, and reinvests the money in start-ups with great potential. 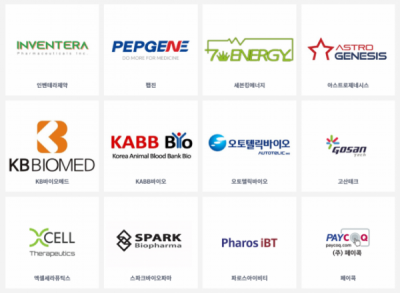 Autotelic Bio focuses on development of new drugs for cancer immunotherapy (ATB-301) and incrementally modified drugs for hypertension & diabetes (ATB-101). The new immuno-oncology drug 'ATB-301' is used in combination with Trabedersen and IL-2; IL-2 enhances the ability to fight cancer cells, while Trabedersen weakens the cancer cell’s protective barrier called TGF-β. This can maximize effectiveness of chemotherapy, and its concomitant use with existing the response rate (therapeutic effect) of various types of carcinomas.

Inventera Pharmaceuticals is currently developing a contrast agent specialized for the brain and cardiovascular system that has no side effects and has excellent contrast effect, through its source technology of MRI contrast agent. The current contrast agent is mostly based on gadolinium, but gadolinium can cause 'nephrogenic systemic fibrosis (NSF)', which is a possible lethal side effect characterized by hardening of the whole body. Inventera's MRI contrast agent is safe because it does not contain gadolinium and uses an ingredient similar in composition to an iron supplement approved by the FDA. Additionally, it can stay in a blood vessel for a long time, so it enables high-resolution imaging. One of its main characteristics is that it does not accumulate in the body, but instead is released from the body through urine over time.