a non-exclusive license agreement..JW Bioscience holds a patent for the IP in Korea, US, 21 European countries, China, and Japan 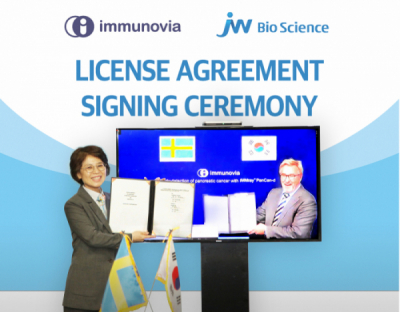 This licensed IP can be used to detect pancreatic cancer at an early stage and JW Bioscience holds a patent for the IP in Korea, US, 21 European countries, China, and Japan. The license agreement grants Immunovia a non-exclusive right to use the patent, and it is expected to strengthen JW Bioscience’s position in the global in-vitro diagnostic market.

JW Bioscience is pursuing its own development of a complement factor b (CFB) and CA19-9-based early diagnosis kit for pancreatic cancer and expects that it will be an innovative solution to unmet needs as it provides a chance for early detection of pancreatic cancer and increased survival rates through a simple blood test.

Eun-Kyung Hahm, CEO of JW Bioscience, said, “This contract is an important milestone for JW’s unique IP position and a recognition of the excellence of JW technology in the global market.” She also added that, “JW will be able to further strengthen its commercial and technological competitiveness through the collaboration with Immunovia.”

Immunovia has recently introduced the world’s first laboratory developed test for the early diagnosis of pancreatic cancer in the United States, exclusively available from Immunovia, Inc.

Patrik Dahlen, CEO of Immunovia, said, “We are delighted to enter into this agreement with JW Bioscience that further secures relevant IP for Immunovia. That the licensed biomarkers were discovered by Immunovia and JW Bioscience independently confirms their respective biomarker discovery approach.” He added that, “By entering into this agreement, Immunovia and JW BioScience will also evaluate possibilities for commercial and development collaboration to enable early detection of pancreatic cancer.”

The holding company JW Holdings obtained patents in Japan (2018), China and Europe (2019), and US (2020) for early diagnosis of pancreatic cancer. The patent was transferred to JW Bioscience in 2021.