PeLeMed Develops the Low-Molecular Compound, What Are the Advantages of 'PeLeSeLect'? 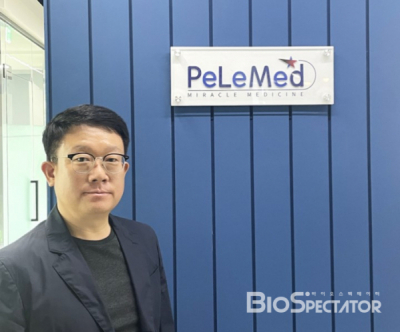 Yong-Chul Kim, CEO of PeLeMed, said, “Using our self-developed low-molecular compound drug discovery platform, we discover new anticancer drug target candidates. Through this, we will develop an innovative anti-cancer drug with a new mechanism for drug-resistant refractory cancers and has a low risk of developing resistance.”

Pele is a Hebrew word meaning 'miracle', and PeLeSeLect was named after the desire to discover a miracle drug.

The lead pipeline ‘PLM-101’ discovered by PeLeSeLect is being developed for the therapy of solid cancers such as non-small cell lung cancer (NSCLC) and breast cancer with resistance to existing treatments. In particular, the strategy is to first develop non-EGFR kinase inhibitors targeting patients who do not respond to the 1st-3rd generation drug such as AstraZeneca's EGFR inhibitors ‘Iressa (gefitinib)’ and ‘Tagrisso (osimertinib)’.

The second pipeline, PLM-102, is being studied by targeting drug-resistant refractory acute myeloid leukemia (AML). It is expected to have a higher target inhibitory effect than existing treatments and to have advantages in terms of safety.

Patent registration for PLM-101 was completed in Korea and Australia in May of this year, and PLM-102 in Korea last July.

PeLeMed's PeLeSeLect is a technology to discovers new drug candidates that target the ATP binding site of activated kinase proteins using a database of about 240 anticancer ligand databases that have been approved or under development and a database analyzing the structure of activated kinase. PeLeMed has built a database of 25 kinases applicable as drug targets and 75,000 ligands that can bind to them.

The mechanism is as follows. When a certain kinase is activated in tumor cells, it undergoes phosphorylation to activate intracellular signaling and promote cancer cell growth. If other substances bind to the ATP binding site of this activated kinase, the kinase is inactivated and the signal transduction process is inhibited, thereby suppressing tumor growth.

PeLeMed is developing drugs that target the activation loop and the phosphate pocket among ATP binding sites of a new targeted kinase. Since these are sites where ATP binds and regulates kinase activity, the probability of mutation is low and the risk of resistance development is low.

What are the advantages of new drug candidates using PeLeSeLect? The first is to discover new targeted drug candidates that can overcome the shortcomings of existing targeted chemotherapy or immunotherapy drugs. First, AstraZeneca's EGFR inhibitors 'Iressa, (gefitinib)' and 'Tagrisso (osimertinib)' are type-I kinase inhibitors. However, because they bind to the ATP subpocket (gatekeeper), the tumor can acquire resistance when a mutation occurs, and treatment options are limited in the case of recurrence(doi:10.1007/978-3-030-48283-1_2). Immunotherapies have a limitation, which is showing a low response rate, so global pharmaceutical companies such as Merck (MSD) and BMS are conducting clinical trials that combine those with other drugs to increase the response rate. 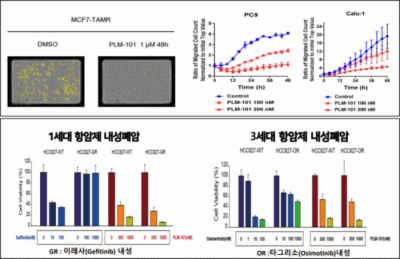 PeLeMed's lead pipeline is PLM-101 with a triple functioning mechanism that mainly targets genes overexpressed in acquired-resistant cancer patients. It is currently being developed for solid cancers such as lung cancer and breast cancer with acquired resistance.

PeLeMed is developing PLM-101 with a triple functioning mechanism that simultaneously targets RET, a well-known target of anticancer drugs, and two genes known to control cancer metastasis and overexpressed mainly in patients with acquired-resistant cancer. For example, one of the genes targeted by PLM-101 is expressed in about 20% of patients with non-small cell lung cancer (NSCLC) that are resistant to Tagrisso.

CEO Kim said, “PLM-101 clinically targets overlapping genes among many cancer patients with acquired resistance. The development is proceeding rapidly since there have been reports of papers suggesting that the target of PLM-101 is clinically related to acquired-resistant tumors."

Currently approved RET inhibitors are 'Retevmo (selpercatinib)' of Eli Lilly and 'Gavreto (pralsetinib)' of Roche, both of which received accelerated approvals by the US Food and Drug Administration (FDA) last year.

The results of the animal model study of PLM-101, which is being developed by PeLeMed, are as follows. First, PeLeMed analyzed gene expression in non-responding breast cancer patients to existing anticancer drugs. As a result, it was confirmed that the survival rate was decreased in the cases of the high expression of the PLM-101 target gene compared to patients with low expression.

In fact, PeLeMed confirmed the result of increasing the anticancer effect in a dose-dependent manner when administering PLM-101 to lung cancer cell lines resistant to Iressa and Tagrisso. In addition, when PLM-101 was administered to the MCF-TAMR cell line that was resistant to 'tamoxifen' used as a breast cancer treatment and lung cancer cell lines PC9 and Calu-1, tumor metastasis was suppressed. When PLM-101 40mg/kg was administered to a mouse model transplanted with a tamoxifen-resistant cell line, the size of tumor cells decreased.

Another resistance acquired tumors-targeted pipeline of PeLeMed is the dual-functioning PLM-102. PLM-102 has a mechanism that simultaneously inhibits RET and a gene mutation that occurs in about 30% of patients with acute myeloid leukemia(AML).

PeLeMed confirmed that the tumor size decreased in a dose-dependent manner as a result of administering 5 mg/kg, 10 mg/kg, and 20 mg/kg of PLM-102 to a mouse tumor model and no weight loss was observed at any dose. CEO Kim said, “PLM-102 has superior target gene inhibitory effect compared to previously approved competitive drugs, and has the characteristics of being absorbed only in the stomach and upper duodenum due to solubility according to pH change in the stomach/intestine. We expect that it will have advantages over existing drugs in terms of safety.”