The 4 meanings of the ABL-Sanofi’s $10.6B deal, Comparing with big deals in Korea

"Big deal after 6 years since Hanmi"...ABL's $10.6B deal points to watch and why we expect more from deal? 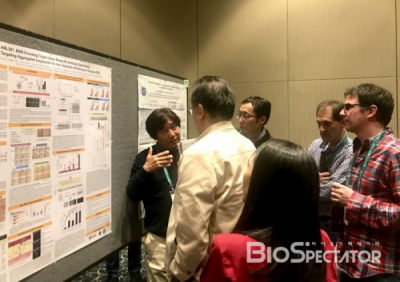 ABL Bio made a 'big deal' from the start of the new year, taking the first step towards the next stage. At the site of JP Morgan Healthcare (JPM), the largest investment conference where big deals in the pharmaceutical and bio industries begin in earnest, it signed a license-out deal worth a total of $1.06 billion with global big Pharma, Sanofi. The domestic pharmaceutical and bio market, which had been stagnant in the recent drought of the big deal, is reversing the industry with news like welcome rain for the first time in a long time.

This deal is becoming a hot topic in the industry just for its size. ABL Bio will receive a down payment of $75 million (about KRW 90 billion) from Sanofi, which is equivalent to 7.1% of the total license-out deal of $1.06 billion (about KRW 1.272 trillion). In addition, if you add up to $45 million as a near-term milestone, the total is $120 million (about 144 billion won), accounting for 11.3%. The company expects to receive near-term milestones within this year. This is about two-thirds of the total down payment (including near-term milestones) of 44 deals in 2021, which was calculated by Biospectator and 251 billion won. This is a number that can gauge the meaning of this single deal by ABL.

ABL Bio's leap forward as a new drug development company is also just the beginning. ABL Bio started the ABL301 project and raised the BBB platform to the current level, taking five years for this deal to take place. In addition, the past year until the deal negotiations were concluded, and through discussions with several companies, a series of fierce moments where it was impossible to predict repeatedly happened. Nevertheless, the decisive reason that the deal to be successful was based on the persistence to prove competitiveness with data, science-oriented, and steady conference presentations. ABL Bio has updated the results of ABL301 at global conferences such as the Alzheimer's disease (AD)/Parkinson's disease (PD) conference, Keystone symposium, and BBB Summit every year.

Lee Sang-hoon, CEO of ABL Bio, said, "Sanofi was aggressively looking for the 'best-in-class' asset in the Parkinson's disease field, and the deal was finally concluded as it was repeated until the end." "We are meeting with several global big pharma at JPM and conducting meaningful discussions on the company's bispecific antibody platforms such as BBB transmission platforms," he said. Adding, "We are planning to submit the Investigational New Drug Application (IND) for ABL301 in the U.S., which signed the deal in September this year," and explained, "We expect near-term milestones to flow in within this year following IND approval and trial start."

Biospectator summarized four meanings of the deal, including the meaning of this deal so far in the pharmaceutical and bio industries and the value and scalability of ABL301 asset in the future.

1. Big deal in 6 years after Hanmi... “The largest ever” as a non-clinical asset

In fact, how big is this ABL Bio deal in terms of the technology export (L/O) contracts that the domestic pharmaceutical and bio industries have signed so far? Biospectator tracked 17 contracts that were evaluated as so-called “big deals” in the industry since 2015, when Hanmi Pharmaceutical started to write out the history of licensing out new drugs in Korea. However, SK Biopharmaceuticals’ epilepsy drug ‘Cenobamate’ was included only in the table and excluded from the comparative analysis, as it was a deal that passed over the distribution rights for each region after the U.S. market.

First, in terms of the amount of the down payment, this deal is evaluated as the first big deal in six years since Hanmi Pharmaceutical exported its anticancer drug technology.

The deal, which has recorded the largest down payment so far, is a deal that Hanmi Pharmaceutical licensed out three new drugs in November 2015 with Labscovery technology that increases the half-life of drugs in Sanofi. The down payment alone was 400 million euros, and the total amount was 3.9 billion euros. The reason for its high value was that it was a deal for three types and all of them were in the advanced stage of the development. Specifically, at the time of the contract, Efpeglenatide had completed phase 2 clinical trials, persistent insulin had undergone phase 1 clinical trials, and preclinical trial of Efpeglenatide and persistent insulin had been completed.

For the deal that recorded the second largest down payment, Hanmi Pharm signed a $105 million down payment for 'HM12525A (LAPS-GLP/GCG dual agonist)', a phase 1 clinical trial-stage diabetic obesity drug candidate, to which Labscovery was applied to Janssen, including the license-out for a total of $915 million, in the same year of the first big deal.

The next deal was Hanmi Pharmaceutical's license out to Roche Genentech in 2016 for a total of $910 million, including a down payment of $80 million for pan-RAF inhibitor "Belvarafenib." In terms of the size and weight of the down payment, ABL Bio's deal is evaluated as the first big deal in six years following the export of Belvarafenib technology.

ABL Bio took the lead in the size of overall deal, and ABL301 is interpreted to have been evaluated for its high potential in terms of the future value of candidate substance as clinical development progresses. Looking at the proportion of down payment, Belvarafenib accounted for 8.8%, which was higher than the ABL deal (7.1%). The fact that it confirmed the efficacy to some extent in the first phase of clinical trials in Korea seems to have worked positively. The deal amounts to 11.3% including near-term milestones that ABL will be received along with phase 1 clinical trials this year.

Yuhan's Lazertinib is considered a representative drug that has been progressing smoothly since its clinical development was licensed out to global big pharma. Yuhan received a down payment of $50 million in licensing out Lazertinib to Janssen, and the total amount was $1.25 billion.

There is another point to watch. ABL Bio's ABL301 was recognized as the largest down payment as a non-clinical asset. In a similar step, Yuhan Corporation licensed out the NASH non-clinical asset "YH25724 (GLP-1/FGF21 dual agonist)," which is about to undergo clinical trials at Boehringer Ingelheim, for a total of $870 million, including a down payment of $40 million.

Alteogen, known as a representative platform company in Korea, has signed a non-exclusive license deal with two global big pharma companies (undisclosed) based on ALT-B4(Human hyaluronidase), a technology that converts intravenous(IV) biopharmaceuticals into subcutaneous administration(SC). In the case of the deal signed in 2019, a total of $1.373 billion including a down payment of $13 million, and the second deal the following year, a deal worth a total of $641.5 million including a down payment of $16 million were signed. The proportion of down payment in each deal was 0.9% and 2.5%.

Lastly, if the big deal so far has mainly occurred in the fields of anticancer drugs and nonalcoholic steatohepatitis (NASH), where deals are actively occurring in the global market, it is noteworthy that ABL Bio has made a big deal for the first time in the degenerative brain disease field in the central nervous system (CNS). Last year, the US Food and Drug Administration (FDA) granted accelerated approval for 'Aduhelm (aducanumab)' as the first Alzheimer's disease treatment. This can be seen for a trend of global big pharma’s movement to develop a new degenerative brain disease is now back on the track. 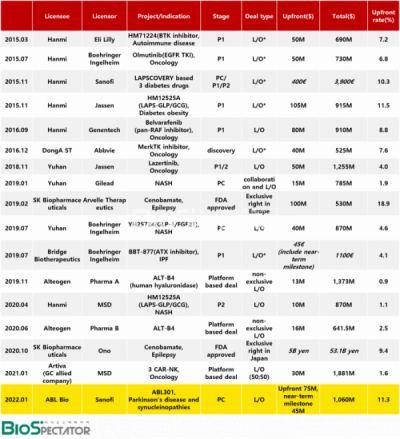 So, what is the decisive reason why Sanofi, ABL's deal partner, evaluated ABL301 as a "best-in-class" asset? This can be considered in two aspects.

First, it is an α-synuclein antibody with enhanced blood-brain barrier (BBB) permeability. The development of alpha-synuclein antibodies in the field of Parkinson's disease is an early stage in which proof-of-concept (PoC) data are beginning to appear, and most are being developed in the form of monoclonal antibodies. The most leading company confirmed the signal that Roche would show efficacy in the biomarker in early clinical trials, and is conducting a phase 2 clinical trial of ‘Prasinezumab' for patients with Parkinson's disease. Lundbeck-Genmab and AstraZeneca-Takeda are following behind.

In the case of monoclonal antibodies, the BBB permeability is known to be 0.1~0.3%, and there has been no clinical study of an alpha-synuclein antibody with improved BBB permeability. With the goal of increasing drug efficacy by increasing BBB permeability, ABL Bio seems to be leading the way regarding the alpha-synuclein target. Another important distinction is that ABL301 has an epitope that selectively binds to aggregation fibrils, a pathological form, compared to monomers.

Second, ABL Bio has confirmed the competitive advantage of the BBB platform 'Grabody-B'. Most of the BBB shuttle molecules used by global leading groups such as Denali Theraputics and Roche are focused on TfR, but there are still concerns about "on-target" side effects as TfR is highly expressed in red blood cells and liver. ABL Bio uses IGF1R (insulin-like growth factor 1), a "first-in-class" target that is highly expressed in brain tissue compared to other organs as a BBB shuttle molecule, and confirmed drug safety of ABL301 through nonclinical toxicity tests.

In particular, ABL Bio has secured a superior pharmacokinetic (PK) profile compared to competitors with other BBB platforms. ABL Bio confirmed that a bispecific antibody to which Grabody-B was applied in a nonhuman primate (NHP) test at the AD/PD conference last year had a PK similar to that of a monoclonal antibody. In the case of leading competitor's platforms, it can be differentiated in that they showed a relatively short half-life. These PK properties led to good drug exposure in the brain. When CNS exposure was evaluated, ABL301 increased about 8 times in cerebrospinal fluid (CSF) and 13 times in cerebral tissue compared to monoclonal antibodies 48 hours after drug administration. 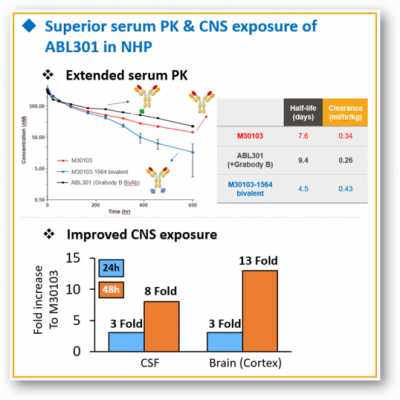 3. Beyond cancer disease, ABL Bio develops its own clinical development capabilities in CNS

The positive evaluation of this deal is that ABL Bio is leading the phase 1 clinical trial. Regarding this type of contract, CEO Lee gave meaning, saying, “We can learn clinical development experience and know-how from Sanofi.”

And now, through the entry of ABL301 into clinical development, the scope of the disease will be expanded to the CNS area. In the case of the development of new drugs for degenerative brain diseases, it has specific characteristics in patient screening, patient selection criteria, brain pharmacokinetic characteristics of drugs, and clinical design.

What is expected in the future is the scalability of the BBB-penetrating bispecific antibody platform ‘Grabody-B’. This is because the concept of applying the BBB penetration platform to biopharmaceutical products can be extended to targets other than alpha-synuclein. In addition to the method of licensing out substances such as ABL301, it is possible that joint development and licensing deals in which the other company applies the Grabody-B platform to the desired target.

Expansion of the disease can also be expected BBB-transmitting bispecific antibody antibodies are a concept that increases the brain transmittance of biopharmaceutical products and can be applied not only to brain diseases but also to various diseases such as brain (transitional) cancer and rare diseases.

The scalability to a new modality is also drawing attention. Recently, attempts have also begun to incorporate BBB transmission platforms to deliver oligonucleotide drugs to the central nervous system.