Exostemtech, 'Adipose-derived Exosome' "Clinical Trial for OA in Next Year"

Intra-articular injection 'CARTISOME', a candidate drug for degenerative osteoarthritis (OA), is expected to enter the phase 1 clinical trial in the second half of next year..Phase 1b/2a clinical tria 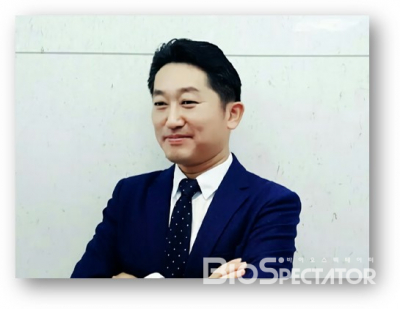 Exostemtech was founded in 2016 by Professor Yong-woo Cho of Hanyang University ERICA campus and attracted 4 billion won in Series A investment in 2019. Following 2.5 billion won in a bridge round investment last year, they raised 10 billion won of series B round funding in October of this year. They plan to apply for technology evaluation for listing on the KOSDAQ in the second half of next year. In addition, Exostemtech transferred exosome-based cosmeceutical technology to ExoCoBio in Korea in 2017 and is receiving running royalties every year.

Yongwoo Cho, CEO of Exostemtech, said, “We plan to conduct phase 1 clinical trial of CARTISOME, the first exosome-based osteoarthritis treatment in Korea, next year. In addition, we have received approval for phase 1b/2a clinical trial of the drug, which inhibits the exosomes secretion from cancer, in combination therapy with Keytruda, for solid cancer." Also, Exostemtech is developing 'HEPATOSOME', a candidate treating for hepatic fibrosis, and 'OSTEOSOME', a candidate for treating osteoporosis. Biospectator looked into Exostemtech's pipeline, production technology, and clinical development status based on exosomes.

◆ ‘CARTISOME’, a Candidate for Treatment of Degenerative Osteoarthritis(OA)…“Entering Phase 1 Clinical Trial in Next Year”

Degenerative osteoarthritis(OA) is a disease in which knee cartilage wears down due to aging, obesity, genetic factors, and injuries. Exostemtech expects that CARTISOME will treat degenerative OA with three mechanisms: anti-inflammatory effects, cell differentiation and migration, and homeostasis recovery.

First, CARTISOME suppresses the activation of M1 macrophages, which are inflammatory immune cells, and reduces the expression level of the MMP family, which are cartilage degrading enzymes . At the same time, it induces differentiation of M1 macrophages into M2 macrophages, which are anti-inflammatory immune cells. M2 macrophages decrease the inflammatory response to relieve pain and induce tissue regeneration. CARTISOME proliferates chondrocytes and allows the cells to migrate to the damaged area. Finally, it promotes the synthesis of extracellular matrix(ECM) protein secreted by chondrocytes.

Exostemtech confirmed the cartilage regeneration effect in an arthritis animal model administered with CARTISOME(doi: 10.1080/20013078.2020.1735249). First, the research team confirmed that the mRNA and protein expression of the cartilage degrading enzymes MMP-1, MMP-3, MMP-3, and ADAMTS-5 increased when IL-β1 was treated to induce an inflammatory response in osteoarthritis chondrocytes. The mRNA and protein expression of increased cartilage degrading enzymes were significantly reduced to normal levels when CARTISOME, which is adipose-derived stem cells EV(hASC-EVs).

Additionally, the research team confirmed the cartilage regeneration effect by administering CARTISOME to a monosodium iodoacetate (MIA)-induced osteoarthritis(OA) rat model or surgical destabilization of the medial meniscus(DMM) model. The research team injected MIA into the rat and administered PBS (phosphate buffer saline), CARTISOME, and hyaluronic acid(HA) once a week for 3 weeks from 1 week later. This model was defined as a subacute model before the OA progressed sufficiently. The Mankin score, analyzed by cartilage structure and cellularity, was significantly decreased in the subacute model administered with CARTISOME compared to the PBS and HA administration groups, confirming the cartilage regeneration effect.

As a result of administering CARTISOME 6 times a week to the surgical DMM model, the OARSI index was significantly improved, and the cartilage tissue was restored to the normal tissue level. In addition, the expression of MMP-13, a cartilage degrading enzyme, was also significantly reduced in cartilage tissue. The OARSI index evaluates the degree of osteoarthritis on a scale of 0 to 6, with higher numbers indicating more severe. 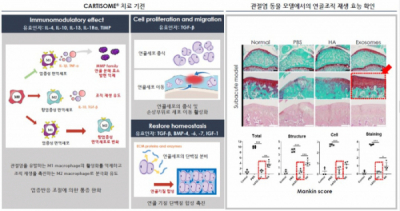 CEO Cho said, “Most exosomes represent the function of parent cells that secrete them. Tumor-derived exosomes have functions related to cancer metastasis and growth, so we are conducting phase 1b/2a clinical trials of a drug, which inhibits tumor-derived exosomes, in combination therapy with the PD-1 antibody Keytruda for solid cancer."

Exostemtech used sulfisoxazole(SFX), an antibiotic approved by the US Food and Drug Administration (FDA), as a drug repositioning method. SFX is known to inhibit exosome production and secretion from tumor cells. In particular, it blocks exosome secretion by interfering with endothelin receptor A(ETA) overexpressed on the surface of tumor cells (doi.org/10.1038/s41467-019-09387-4).

Exostemtech is currently conducting a phase 1b/2a clinical trial for the combination of ‘EST-SFX-T+Keytruda’ in 26 patients with advanced solid cancer together with Professor Jinhyeong Kang of The Catholic University of Korea Seoul St. Mary’s Hospital. CEO Cho said, “First, tumor-derived exosome reduction and safety after drug administration are confirmed, and then we will increase the number of patients for indications such as lung cancer and proceed with combined clinical trials. It is a strategy to conduct initial clinical trials in Korea and conduct global clinical trials from phase 2b, or transfer technology. 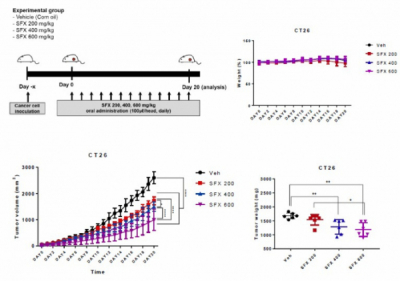 Why is Exostemtech conducting the clinical trial for the combination of SFX and Keytruda? First, PD-L1 protein, expressed by exosome secreted from tumor cells, inhibited CD8 T cell activity and was highly expressed in non-responders of Keytruda, which was associated with the prognosis of patients treated with cancer immunotherapy(doi.org/10.1038/s41586-018-0392-8). Also, when PD-L1 expressed on the exosome surface was inhibited, the anticancer effect was enhanced and T cell activity was increased(doi.org/10.1016/j.cell.2019.02.016).

According to the specific study results, first, PD-L1, expressed in exosomes secreted from melanoma, suppressed CD8 T cell activity and cytokine production, thereby lowering the immune response. Melanoma-derived exosomes were injected into the actual mouse model and analyzed 24 days later. As a result, the tumor size increased to about 2500㎣. The tumor size of the control group was about 500㎣, and the tumor size decreased to about 1000㎣ when exosomes were injected with the PD-L1 antibody.

Patients with stage 3 or 4 melanoma who did not respond to PD-1 antibody, Keytruda(non-responder, NR) showed a significantly higher expression of exosome-derived PD-L1 in the blood (p=0.0001). In addition, the overall response rate(ORR) to Keytruda in melanoma patients was 77% (14/18 patients) in patients with exosome PD-L1 concentrations lower than 1.03 ng/mL and 26.9% (7/26 patients) in those with exosome PD-L1 concentrations higher than 1.03 ng/mL. The results of the study suggest that the effect of Keytruda treatment may vary depending on the concentration of exosome PD-L1 in the blood(doi.org/10.1038/s41586-018-0392-8).

Let's look at the results of another study in which exosome inhibition of PD-L1 expression enhances the anticancer effect. The UCSF research team, led by Professor Robert Belloch, analyzed the function of exosome PD-L1 using TRAMP-C2 WT, a mouse model of prostate cancer.

In the mouse model of prostate cancer, after 50 days, the tumor size increased from 0㎣ to 1000㎣, and the survival rate decreased to about 10%. On the other hand, tumors did not grow and the survival rate was about 75% or more up to 100 days in the Rab27a mutant (TRAMP2 Rab27a-/-) related to exosome biogenesis, the nSMase2 mutant related to PD-L1 expression and secretion(TRAMP2 nSMase2-/-), and the mouse prostate cancer model in which the PD-L1 gene was removed by CRISPR.

◆ Development of exosome-based therapeutics "What is the global competition?"

Codiak Biosciences developed the EngEX platform, which increased stability and activity by expressing high levels of the exosome-specific protein PTGFRN. Codiak Biosciences is developing drugs that deliver ‘ExoSTING’, which carry STING agonists that stimulate immune responses by applying EngEX technology, ‘ExoIL-12’, in which IL-12 was directly bound to PTGFRN, and STAT6 antisense oligonucleotide(ASO).