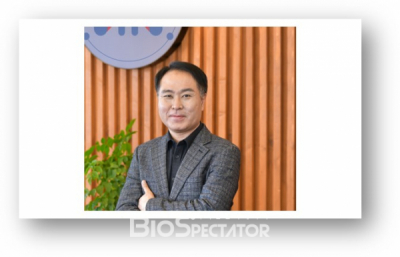 AbTis started to develop a next-generation antibody-drug conjugate(ADC) capable of binding specified number of payloads to directed site without antibody engineering. Based on spontaneously developed linker technology, the company expects that ADC could improve effectiveness and safety compared to existing ones.

ADC is a kind of targeted anticancer agent that specifically recognizes protein antigen present in cancer cells. It delivers the payload(toxic drug) bound with antibody to the inside of cancer cells, thereby increasing the anticancer efficacy. ADC consists of an antibody that targets specified tumor, a linker that binds with drug, and a payload that manifests therapeutic efficacy. In particular, the linker is a key element affecting the effectiveness, safety, and productivity of ADC.

President Jeong Sang-jeon of AbTis stated, “…we are developing an ADC with improved effectiveness and safety based on spontaneously developed ‘AbClick’, the ADC linker platform…”, “… AbClick platform has the following characteristics. The platform is capable of binding payload to specified site without mutation of antibody. It can be separated easily from in vivo cancer cells. It enables the control of drug-antibody ratio(DAR), allowing exploitation of CMC(chemistry, manufacturing, and control) …”

ADC is characterized by increasing anticancer efficacy and decreasing adverse effects attributable to the delivery of payloads manifesting therapeutic efficacy that exploits an antibody specifically binds to cancer cells. An engineering of antibody is required for the creation of mutation in order to attach payload to a directed site. However, it has a limitation ascribable to difficulty in controlling DAR. These are regarded as disadvantages in the process of manufacturing and quality control.

AbTis was founded in 2016 by Professor Jeong Sang-jeon of Sungkyunkwan University. It has been progressing in advancement of a linker platform technology. AbTis invited CTO Oh Yeong-su from Legochem Biosciences, Inc. and CSO Choi Won who had worked for MSD, GSK, etc. Currently, there are over 20 research staffs holding Master’s and Doctor’s degree. The company continues recruiting more personnel. AbTis has also attracted an investment of 15 billion KRW with Series B last February. Including Series A, the investment has reached approx. 23 billion KRW to date. BioSpectator inquired the differentiability of ADC platform technology and pipelines being studied in AbTis.

President Jeong Sang-jeon stated, “…we have classified our technology as the third-generation ADC linker, spontaneously…”, “…different from technologies of previous generations, it requires no preparation of mutant antibody, enables mounting of a certain number of payloads and binds payloads to specified sites…”. This illustrates that excellent high-quality ADC therapeutics with excellent safety and efficacy can be developed from the ADC platform, the 'AbClick', of AbTis.

Currently approved ADC drugs employ the side-chain of cysteine amino acid and lysine constituting antibody to attach payloads. One antibody comprises over 90 lysines and over 30 cysteines by which the determination of site for payloads and DAR control, which influence the effectiveness of ADC and safety, are difficult.

Seagen and Daiichi Sankyo have employed a reductant to convert the disulfide bond of cysteine into thiol group(thiol, SH), which allows an introduction of payloads. Due to the random binding of payloads, the constant control of DAR is regarded as the key of QC.

The second-generation ADC causes a mutation at a specific site through antibody engineering to introduce the cysteine and binds payloads thereto. An exemplary one of this case is the ‘Thiomab’ of Genetech. Despite the presence of engineering process making mutant antibody, it is advantageous in that it enables the binding of a predetermined number of payloads to a specific site.

The third-generation ADC amalgamated advantages of ADCs of previous generations. That is, it employs a linker binding to specific site of antibody for the introduction of payloads. By which it requires no engineering process for the mutation of antibody. It can bind a certain number of payloads to a specific site. ‘AbClick’ of AbTis and ‘AjiCAP’ of Ajinomoto, Japan, are representative drugs that bind to the site of lysine 248.

AbClick of AbTis uses a technology employing proximity effect to bind payloads to the lysine on Fc site of antibody for which the company has developed two platforms: ‘AbClikc Standard’ and ‘AbClick Pro’. Difference between the two platforms is the presence of binding of FcRN (neonatal Fc receptor), the cell receptor that controls the half-life of a drug. ‘AbClick Standard’ lacks the binding site of EcRN. Thus, its half-life is short. However, the ‘AbClick Pro’ enables the binding to FcRNA, resulting in a relatively longer period of half-life. With the binding of FcRN with lgG of antibody, the rate of reuse increases through suppression of lgG decomposition by lysosome, thereby increasing the half-life of a drug.

President Jeong Sang-jeon stated, “…the AbClick Standard can be applied for the development of radiotherapeutic agents through mounting radio-immunotherapeutic materials onto therapeutic antibody as payloads enabled by its characteristic short half-life of linker, or for companion diagnostics, or for prognostic analysis of anticancer treatment..”. AbTis is delving into R&D on hematologic malignancy for ADC exploiting the ‘AbClick Standard’ by taking the short time for delivery of ADC to carcinoma.

AbTis currently employs the AbClick Pro to develop an ADC of relatively longer time for delivery of an efficacious medicine to solid cancer. AbTis demonstrates the binding(DAR4) of 4 payloads with the yield over 90% through the application of AbClick Pro.

HER2 ADC ‘AP001’.. “The Decrease in Size of Tumor in a Mouse Model Suffering Gastric and Breast Cancers”

Let’s look into the HER2 ADC ‘AP001’ resulting from an employment of AbClick Pro by AbTis that demonstrates antitumor effect in a mouse model. AP001 has a form that bound HER2 antibody, the ‘Trastuzumab’, with MMAE(monomethyl auristatin E), the microtubule inhibitor, as a payload.

AbTis shows an effective antitumor effect in mouse models suffering gastric or breast cancer. Specifically, AbTis demonstrates an antitumor effect after 35 days of administration of AP001, Trastuzumab, and Kadcyla to mice suffering gastric or breast cancer. In the analysis of tumor size and body weight of mice(NCI-NI87) after administration of AP001, the group administered with 5 mg/kg and 10 mg/kg of the drug manifested the reduction in size of tumor to the level approximating complete response. Contrarily, although the group administered with Trastuzumab and Kadcyla tended to show smaller tumor size, their antitumor effects were appeared lower than those of AP001.

After administration of AP001, the size of the tumor in mice suffering breast cancers decreased to the level of complete response, while the antitumor effectiveness of identical dosage of Trastuzumab, and Kadcyla were little or none. Body weights of mice suffering gastric and breast cancers manifested no differences for 35 days without observing in vivo toxicities. 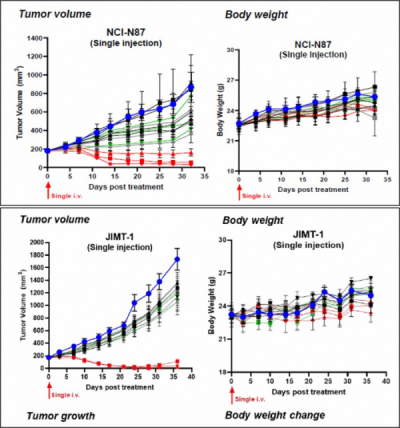 “Additional Excavation of an Antibody for ADC and Payload”

According to IQVIA, an Agency of Market Survey, the number of ADC approved in the United States of America is 11, including 7 therapeutics for hematologic malignancy and 4 therapeutics for solid cancer.

Since the approval of Kadcyla of Roche/Genetech for the first time, the HER2 ADC ‘Enhertu’ of Daiichi Sankyo/Astrazeneca, the ADC ‘Trodelvy’ of Immunomedics for TNBC, the ADC ‘Zylonta’ of Immunomedics for macro B-cell lymphoma, and ADC ‘Tivdak’ of Seagen/Genmab for cervical cancer etc. have been approved subsequently.

Currently, antibodies and payloads to be employed for ADC are limited. In general, antibody therapeutics employed as antitumor agent exploits the mechanism inducing immunological responses through binding to the surface of cancer cells. The antibody for ADC should deliver toxic agent additionally through penetration into cells wherein the capability of penetration is determined by properties of antigen and antibody.

Regarding payload, MMAE, MMAF, and DM-1 as microtubule inhibitors, SN-38 and Dxd(deruxatecan) as topoisomerase inhibitor, and PDB(pyrrolobenodiazepine dimer), a DNA alkylating agent, are currently used. The demand for excavation of new antibodies and payloads is high.

Janssen recently concluded a partnership with Mersana Therapeutics in the amount of a total of one billion USD, including 40 million USD of contract price for the development of ADC by exploiting ‘DolaLock’, a new payload. DolaLock is a technology capable of removing bystander effect of drug which induces toxicity through influencing pericentral cells as well as tumor cells. Further, the Mersana Therapeutics holds a technology capable of mounting constant number of payloads such as 6 or 12 payloads onto ADC. It is in the progress of conducting a Phase 1/2 Clinical Trial of NaPi2b ADC ‘upifitamab rilsodotin’, using new antibody for cervical cancer.

AbTis has also started to establish an ADC pipeline spontaneously by introducing new antibodies. The company has concluded an agreement of introducing Claudin18.2 antibody from GenScript ProBio last December. Claudin18.2 is an antigen manifested excessively in various kinds of solid cancers such as gastric cancer and pancreatic cancer. AbTis has secured an exclusive global license of Claudin18.2 to develop and commercialize Claudin18.2 as an ADC. Currently, Sotio in Czechia and RemeGen in China are in progress of R&D for ADC for solid cancer by using Claudin18.2.