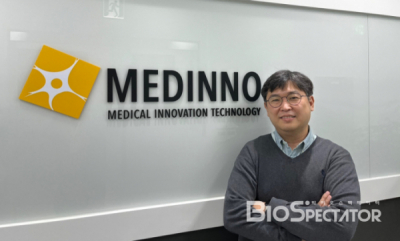 MEDINNO Inc.(Medinno) is developing stem cell therapeutics for hypoxic ischemic encephalopathy(HIE) and intraventricular hemorrhage(IVH), neurological diseases of newborns. The lack of blood flow to the brain at birth and hemorrhage in the brains of premature infants result in severe damage to brain cells, which are exaggerated further by secondary free radical production and inflammation. For both diseases with high mortality rates, there is currently no approved therapeutics, and only conservative treatment such as hypothermia is possible, and even if patients survive, they might have to live with sensory, motor, and/or cognitive disabilities for the rest of their lives. In general, human brain cells do not regenerate, but newborns have neuronal plasticity, so the company expects early treatment to improve prognosis.

Kyeung Min Joo, CEO of Medinno, said, "With HIE and IVH combined, we are using only conservative therapy without cure," adding, "After considering which treatments would be most appropriate for patients, we have started stem cell research and are currently conducting phase 1 clinical trial."

Medinno is a Biotech, founded in 2018 by Kyeung Min Joo, a professor at Sungkyunkwan University School of Medicine, and is focusing on developing innovative treatments for refractory brain diseases using stem cells. Medinno has a total of 45 executives and employees, including about 20 masters/doctoral researchers.

Medinno raised 8 million USD(8 billion Korean won) in 2019 for Series A and 13 million USD(13 billion Korean won) for Series B in 2020. Using the investment, the lead pipeline ‘HIEstem’ is conducting phase 1 clinical trials for HIE and IVH, and a GMP facility, “M-Plant” to produce stem cell pipelines has been established. Medinno plans to complete administration of HIEstem in Phase 1 clinical trials, recruitment of financial investors for the Series B-C bridge funding, and IND submission for the pipeline, adult human neural stem cells 'BSO-101', for spinal cord injury(SCI), this year.

Medinno’s HIEstem is a candidate substance for stem cell therapy that has improved its therapeutic effects through the pre-conditioning using thrombin, a blood clotting factor in umbilical cord-based mesenchymal stem cells(MSCs). In addition, neural stem cell(NSC) therapeutics is being developed as indications for adult SCI and stroke. The biospectator looked into Medinno's platform technology and clinical stem cell therapeutics.

HIE is a refractory nervous disease that occurs in one in 1000 newborns, and there is no cure, so only hypothermia treatment, a conservative therapy, is being used. The actual treatment effect is controversial, and patients have high demand for unmet medical needs because the sequelae of brain damage last for a lifetime. IVH is treated by removing blood through surgical surgery, but premature infants cannot perform surgery, so they have no choice but to wait until the surgery reaches possible weeks before taking action. Like HIE, sensory, motor, and cognitive dysfunctions persist throughout life due to brain damage.

Currently, Medinno is developing a therapeutic agent using a technology that enhances the therapeutic effects by pre-conditioning thrombin, a blood clotting factor, in the manufacturing process of cell therapy products. If thrombin is pretreated during the manufacturing process, the expression of anti-inflammatory factors and growth factors such as BDNF, FGF, HGF, and NGF increases, thereby increasing the protective and regenerative effects for neural cells.

CEO Joo said, “Similar to the priming & boosting method according to the two doses of the vaccine, it first stimulates the thrombin receptor present in the stem cells to put the cells into a pre-conditioned state as if they were exposed to the diseases. It can induce more effective neuroprotective and regenerative effects.”

In the preclinical trial, Medinno confirmed the significant improvement of brain damage by administering HIEstem to rat models with HIE, which was measured by MRI scan. Specifically, Medinno provided hypothermia, a conservative treatment, to HIE rat models for 24 hours, followed by injection of placebo(PBS), MSCs or HIEstem into the brains.

Looking at the MRI scan results of 5 weeks after administration of the drug, the HIEstem administration group(HHT) showed a significant relief of brain lesions compared to the HIE injury control group(HNC) (p<0.05). There was no significant difference between the hypothermia therapy group(HHC) and the MSC group(HHM) compared to the no-treatment group(HNC). Medinno confirmed that the levels of brain inflammatory response markers, IL-1α, IL-1β, IL-6, and TNF-α, significantly decreased in the HIEstem-administered group compared to the MSC-administered group(HHM) and no-treatment group(HNC) (p<0.05).

Medinno demonstrated that the lesion, which had been whitened by bleeding in MRI scan, was improved four weeks after treatment as a result of administration of HIEstem to premature IVH rat models. Cellular apoptosis of brain cells was also reduced, and the passive avoidance test result, an indicator of memory function, was significantly improved.

CEO Joo said, "If we reduce the degree of brain damage even a little, we expect that the aftereffects will be significantly reduced because newborns have good resilience due to high plasticity of brain." 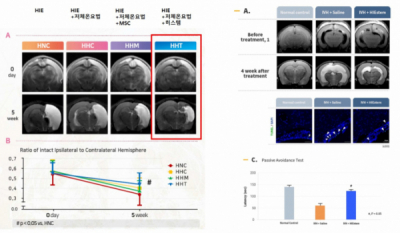 Medinno is conducting preclinical research using human temporal lobe-derived NSCs ‘BSO-101’ for indications for SCI and stroke. CEO Joo said, “In the case of embryonic or fetal stem cells using fertilized eggs or human fetal tissue, ethical issues and tumorigenicity may be an issue. Among adult stem cells, central nervous system(CNS)-derived NSCs mainly differentiate into neural cells, and when proliferated to a certain extent, they don’t proliferate anymore, so it has the advantage of being safe in terms of tumorigenicity.”

Medinno is manufacturing a therapeutic agent by propagating NSCs using tissue from the temporal lobe of the brain donated during a surgical procedure for the treatment of hippocampal sclerosis patients. As it is a NSC derived from brain tissue, it has a high differentiation ability into neural cells compared to other stem cells such as MSCs, and it is being studied as a treatment for various neurological diseases including SCI and stroke that secrete paracrine factors that induce regeneration of brain tissue.

Looking at the preclinical results of BSO-101, Medinno confirmed that the expression of Nestin, a neural stem cell marker, and Tuj1, a neuron marker, increased in BSO-101 compared to MSCs through immunostaining(doi: 10.1016/j.scr.2018.07.006).

Medinno confirmed the effects of BSO-101 on brain cell protection and regeneration, motor ability improvement, and neovascularization in SCI mouse models. Specifically, Medinno created a SCI mouse model that applied a certain physical shock to the spinal cord of a mouse, administered BSO-101, and analyzed the movement of the hind paws and tail shape from 1 week after the SCI. The Basso, Beattie and Bresnahan(BBB) score, which is a measure of motor ability improvement after spinal cord damage, was measured. As a result, the BBB score of the BSO-101 administered group was about 11 to 12, which was significantly improved compared to the BBB score of about 9 in the placebo group(p<0.05).

Medinno shown the result of differentiation of about 20% of administered NSCs into neurons although few oligodendrocytes were produced, as NSCs decreased gradually until 12 days after BSO-101 administration. In addition, in the SCI injury mouse model administered with BSO-101, the distance of NeuN+, a neuronal marker, neurons between injured spinal cord areas decreased. The decrease in the distance means that the extent of nervous tissue damage is prevented.

Medinno indicated that the expression of CD31, a vascular endothelial cell marker, was significantly higher than that of the control group in the SCI mouse models administered with BSO-101 and confirmed the angiogenesis effects of BSO-101 through Matrigel plug analysis. The Matrigel plug containing various growth factors provides a complex extracellular environment to evaluate the ability to form vessels. It is known that increase in angiogenesis is associated with cell regeneration.

As a result, a large amount of angiogenesis was induced when HUVEC(human umbilical vein endothelial cells) and BSO-101 were administered together, whereas few vessels were formed when BSO-101 or HUVEC was administered alone. Although BSO-101 alone cannot properly form blood vessels, Medinno interpreted that it could promote angiogenesis within the injured spinal cord by stimulating vascular endothelial cells(doi: 10.1016/j.scr.2018.07.006).

CEO Joo said, “BSO-101 is expected to be effective for SCI because there is a correlation between the improvement of BBB score and the number of NSCs transplanted. “We expect significant motor function improvement if clinical trials are conducted within 5~7 weeks of SCI because NSCs could alter disease course in the subacute phase of SCI.” he said.

CEO Joo said, "While conducting the clinical trial of HIEstem, the goal is to submit a phase 1 clinical trial plan(IND) of BSO-101 for SCI in the second half of this year."

In addition, Medinno is researching gene therapy using stem cells for multiple sclerosis(MS), a type of autoimmune disease, and brain tumors. First, when IDO1(indoleamine 2,3-dioxygenase 1) was loaded as a therapeutic gene and administered to MS mouse models, it was confirmed that the inflammatory response was improved compared to that of general NSCs.

Another therapeutic gene, CD(cytosine deaminase), is loaded and delivered to the brain to target brain tumors. CD is an enzyme that converts 5-FC(5-fluorocytocine) to 5-FU(5-fluoruracil), a chemical anti-cancer drug, and does not exist in the body. It is a concept that delivers CD into the brain tumor and directly makes anti-cancer agent in the tumor for treatment. It is still in the preclinical research stage, and research is being carried out as a next-generation project. 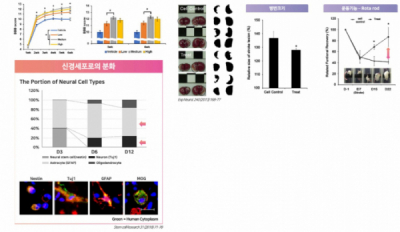